Aries June 2016 Horoscope forecasts a month spent with family and friends. You should focus on home affairs along with inner stability.

You should also strategize your career plans which can be executed at a later date. Spirituality will be important and should be used to stabilize family affairs.

Aries, remember that in June 2016, success has to be achieved by collaboration and compromise.

This is not the time to be assertive, but to be adaptable to situations. Benevolence of others will be necessary and the opinion of others will count if you want to overcome your challenges. 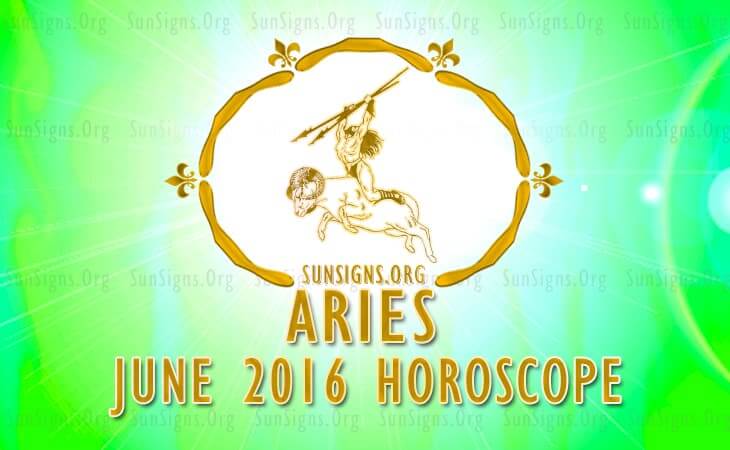 Career growth for the Aries zodiac sign can be achieved by paying attention to family and spiritual matters this month. Job seekers will have success between 13th and 19th June.

Business opportunities for new ventures exist. You will be engaged in building large things and this may be a cause of serious stress.

The June 2016 horoscope forecasts that planet Venus is regressive this month and the financial situation of the Rams will be problematic. Financial plans should be appraised and necessary corrections should be resorted to.

Pace of fiscal growth will not be on the expected lines and will test your patience. You should be prepared to face disappointments in your monetary dealings. You are realistic in your financial approach which may be a source of conflict with people advising you.

The Aries monthly predictions for 2016 June foretell that love matters will be intricate due to the aspect of Venus. Romance is to be expected while chasing educational progress or with friends.

Arians in confirmed relationships will find that their partners are eager to participate in their monetary projects. Married Aries couples will have harmonious relationship with their spouses. No major decisions should be taken during the month on issues of love or pregnancy.

After the 21st June, health of the Arians will be delicate and requires more relaxation. Vitality will be low and can be boosted by outdoor exercises and massages. Emotional strength will be necessary to maintain your physical health. Healthy diet will be absolutely necessary.

To conclude, the Aries horoscope for June 2016 forecasts that this will be a good month for love and romance, but postpone all major decisions to the next month.