Virgo July 2017 Horoscope forecasts that the majority of the planets are in the upper half of your horoscope towards your mid heaven sign. They are in the process of shifting to the lower half of your birth chart. All professional projects that are in hand should be completed in July 2017. The Virgo zodiac sign should use the spare time for a review and analysis of their career so far.

Virgo, the planetary power lies in the Eastern half of the chart towards the rising sign in July 2017. Hence it is time to design your own life and follow it with necessary actions. There is no necessity for seeking the help of others or adapt yourself to their whims and fancies. You need not go by the situations and can overcome all obstacles with courage. Planetary retrogrades will affect the pace of development for the Virgo personality, but will not stop it.

The 2017 monthly horoscope prediction foretells that there will be a surge of creativity and spirituality in the life of the Virgins this month in July 2017. You will be busy with philanthropic activities and humanitarian service to help the downtrodden. Spiritual retreats will provide you the space to look into your inner self. Religion and philosophy will occupy your attention, and you will try to understand them in depth.

Creative Virgo natives will be engaged in intellectual hobbies. They will try to express themselves in artistic ways in July 2017. 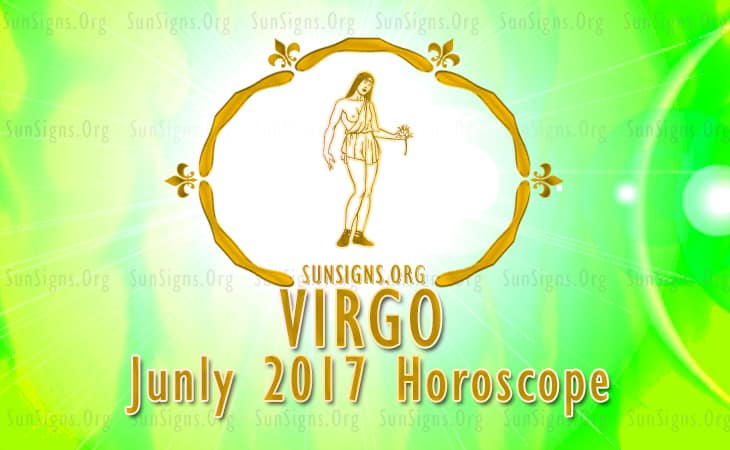 The July 2017 horoscope for the Virgo predicts that career is promoted with the help of social contacts and by networking with the right people. Religious leaders and spiritual people will have a say in the advancement of your job or business. Job seekers will have a tough time getting employment and have to be tolerant in July 2017.

The astrology 2017 predictions forecast that Virgo finances are dependent on your career and will see slow movement. Health professionals might see a drop in their incomes. The monetary slow down gives you an opportunity to analyze your financial career and make major changes in your strategies. Money will have to be spent on family requirements. Virgo, you will have to change your personal image to be financially more successful in July 2017.

The Virgo monthly horoscope for July 2017 predicts that influence of Venus is visible in your personal outlook and the way you dress. You spend money on buying fashionable clothes and jewellery to attract your love mates. Love is still far away and you should allow it to happen slowly. The same goes for pregnancy and children.

The July 2017 Virgo horoscope also forecasts that your health will not cause any serious problems this month. Just keep an eye on your increasing waist line and eat heart healthy foods.

The July 2017 Virgo horoscopes predict that this will be a creatively fulfilling month with good health and improving self image.