Pisces July 2017 Horoscope predicts that psychological issues and domestic concerns will be your priority.

Career will be on the back burner this month for the Pisces star sign. You can work on future plans for your career and review your past performance in July 2017. Make necessary changes only when needed in July 2017.

The House of others will get dominant after the 23rd of July 2017 for the Pisces sun sign. Your independence and self-esteem are not robust, and it is advisable to go by the advice of others.

You have to follow the path already traveled and make compromises if necessary to move ahead in life. Pisces personality traits show you are good at compromises and this will help in July 2017. 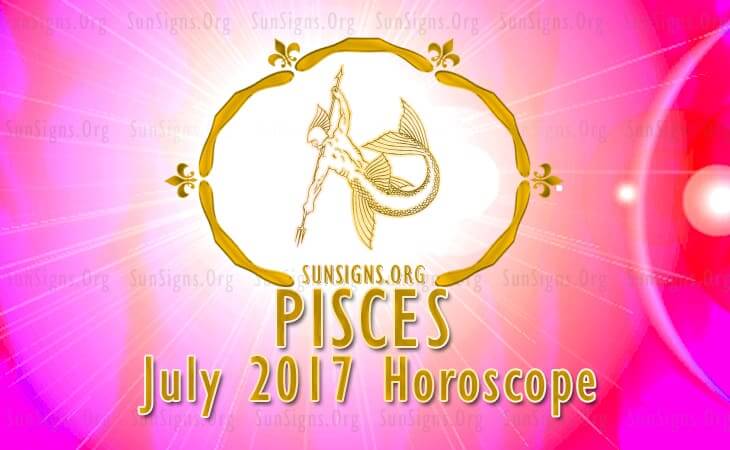 The July 2017 monthly astrology forecasts for the Pisces foretell that planetary positions will create a clash between professional matters and financial values. You will have to wait for clarity to emerge and till that time career will be in the background. Job seekers have good chances of employment in financial institutions. Piscean businessmen will do well in new enterprises in July 2017.

The horoscopes 2017 predict that planetary aspects are favorable for money flow in July 2017 for the Pisces born. You are able to achieve monetary success through bold actions. You are prone to speculate this month, but period up to 22nd July 2017 is not favorable. Family members and seniors may pose some problems for financial progress.

Pisces, you should avoid overspending on socializing and enjoyments. You will be able to get new investors for your projects after the 22nd of July 2017. Earnings will come through tax refunds, royalties or from your partner. Money can be made by helping others to become rich. You may get money from inheritances also in the July month of 2017.

The Pisces horoscope for July 2017 foretells that here will be ample romance this month, but commitment will not be forthcoming. Single Fishes will find love in family parties and social events till the 8th of July 2017.

After that romance is to be found at the office or in health centers. You look for perfection in your romantic partner which is not ideal for love or long term relationships. This might also have an effect on the Pisces couples’ decision to get pregnant or not in July 2017.

The July 2017 sun sign predictions for Pisces forecast that health is quite decent this month. But you will have to make important changes to your fitness routines over a long term. More self-control is required in your life to remain healthy. You need to cut down on sugar and your intake of red meat. Instead you can use honey, stevia or jaggery in your diet.

The July 2017 Pisces monthly horoscope forecasts a period of good health while career, money and love relationships will need some nurturing.