July 2017 Capricorn Horoscope forecasts that the House of Career is powerful this month. You have to follow your professional objectives and make them successful. Domestic and psychological concerns can be safely put behind for the present in July 2017.

The House of Others is very dominant in July 2017 for the Capricorn star sign. This is not the time for independence and courageous actions. You are overwhelmed by the circumstances and should allow the natural flow of things. You can expect worthy things to happen on their own. Capricorn, you have to seek the help of others and adapt yourself to people and events in July 2017.

Planet Saturn has a serious influence on your behavior and well being this month. Your personal allure will increase and your vitality will improve enormously. You will be interested in spirituality and the sea goat will like to unravel the mysteries of life and death in July 2017. 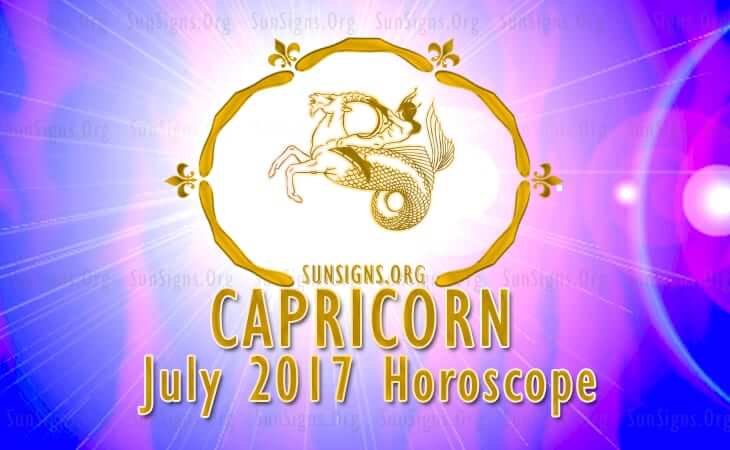 The birthday horoscope 2017 foretells that many new openings are available in your career and you should try to grab them, Capricorn. July 2017 is the time to work on your projects and make them successful.

The July 2017 monthly astrology predictions also forecast that planets are not favorable for the Capricorn finances this month. There will be delays in your personal monetary projects. You will be successful in handling the fiscal ventures of other people and this will help you to achieve your own fortunes.

Capricorn, you should focus on cost reduction, clearing old loans and getting rid of useless projects after the 21st of July.

Single Capricorn born people will are looking for riches in their romantic partners in July 2017. You may find love in the workplace, health centers or in financial institutions while following your interests in money or health. Love will be more sensual this month for the Capricorn compatibility between couples. This is also a good time to plan for a child.

Family environment will be turbulent in July 2017 and there will be conflict between your partner and the members of the family. Family members of the Capricorn natives will be intrusive and this may upset your balance.

The July 2017 horoscope for Capricorn sun sign predicts that your health will be problematic till the 22nd and can be improved by conserving physical and sexual energies. Good fitness and diet routines will help in maintaining good health. These simple home remedies too can help you deal with most ailments.

The Capricorn horoscope for July 2017 forecasts that this will be a career and business oriented month, but health too needs to be taken care of.