Aries July 2017 Horoscope forecasts that family and psychological concerns will dominate your life. It is also important to harmonize domestic life with professional objectives for the Arians in July 2017.

Aries, cooperation and consensus will become important in July 2017 for self preservation. Self-assertion and bold actions will be on hold and you have to keep the interest of others in mind. You should be able to adapt yourself to situations and to people.

As this is against the basic Aries personality trait, you will have a tough time adapting to the new conditions in July 2017. Your success depends on how well you can cope up with the situation.

In July 2017, more than 40 per cent of the planets are retrograde and life will be moving at a slow pace. The Aries born have to be quite tolerant. 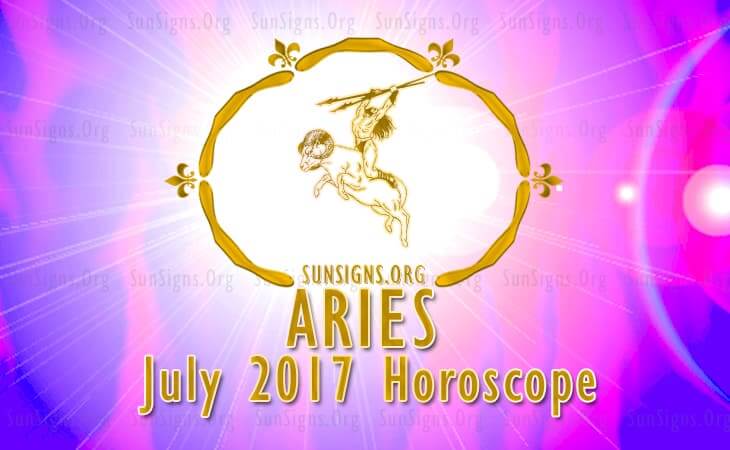 The July 2017 Aries monthly predictions foretell that your career will undergo major transformations and it will be connected with having children or bringing up children. You are looking for innovation in your job or business.

Many of you rams are looking forward for a profession in which provides excitement and entertainment in July 2017. Money will be important, but secondary. Arians looking for jobs should be cautious about the offers they get after the 23rd of July 2017.

The 2017 astrological predictions for the Aries sun sign forecast that your monetary situation will be excellent in July 2017. Your financial intelligence too will be active.

You tend to deal with speculative investments and it is advisable that some amount of caution is exercised by the Aries in July 2017.

The 2017 love forecasts predict that love for the Arians is more about having pleasure and amusement this month in July 2017. Singles will find romance while holidaying or having fun in parties. Till the 23rd love is not serious and after that it means being useful to your partner. This might also be a good time to get pregnant. Read about Aries compatibility.

This month in July 2017, Aries you will spend your time harmonizing relations with family members and attending to the household problems which are overdue. The month is ideal for renovations and decorations of the house.

The July 2017 Aries horoscope forecasts that you health will be troublesome till the 22nd and requires enough rest and breaks. You can improve fitness by indulging in activities which provide happiness and entertainment. All changes in your exercise and diet plans should be done before the 23rd of July 2017. Here are a few foods rich in oxygen and foods for longevity.

The Aries horoscope for July 2017 forecasts that you will need to create a balance between work and pleasure this month.