Aquarius July 2017 Horoscope forecasts that the House of Others will become stronger after the mid of the month. Planetary positions are not favorable for independence and your confidence level is low.

Aquarius, you should flow with the situations and accept what is happening. Others point of view will be important in July 2017 for the Aquarius sun sign. You can accomplish your goals with the help of others. Consensus and adaptability will be necessary for moving on in life in July 2017.

Both planet Saturn and planet Mars will induce tension in your life due to their unfavorable aspects in July 2017. Spirituality will rule the life of those with an Aquarius birthday in July 2017. Your social activities will center on spirituality. You will resort to amusement, social get-together and dating new people to reduce stress in your life. 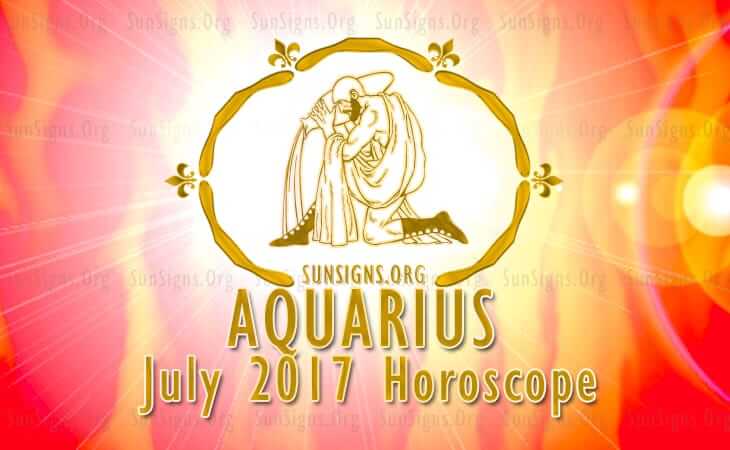 The 2017 horoscope forecast suggests that the career planet Pluto is retrograde this month for the Aquarians. Professional and business development will be slow. You have to be tolerant and wait for things to answer for themselves in July 2017.

The July 2017 Aquarius monthly astrology also predicts that your financial planet Neptune is also retrograde this month. Hence you should allow things to happen at their own pace and wait for things to brighten up in July 2017.

The July 2017 zodiac forecasts for Aquarius predicts that your romantic life with your partner will be lively and vigorous. There will be lot of socializing and partying. Love is more physically sexual but emotions are missing. There may be flare-ups and arguments in relationships for small reasons.

One way for the water bearer to get out of this situation is to indulge in fine arts and artistic diversions in July 2017. Single Aquarians will be looking for soul mates that are spiritually inclined. Married couples might want to start planning for a baby.

Socially the Aquarius man and Aquarius woman will be very much involved in partying. You will have opportunities to make a large number of social contacts. Saturn will examine your friendships and unwanted contacts will be eliminated. Overseas travel by family members or friends should be undertaken only towards the end of July 2017. Also get your 2017 Numerology Horoscopes.

The July 2017 Aquarius zodiac forecasts foretell that your health will be delicate after the 22nd and requires more attention. You may have to make significant changes to your diet plans. Energy levels will be low and hence you need to sleep well.

The July 2017 Aquarius horoscope predicts that your career and finance will be a little slow, your love life will be happening.