July 2016 Horoscope for Virgo forecasts that your career and profession will be powerful during the first three weeks of the month. Your attention should be on your job this month. You will do well to enhance your professional expertise through advanced study and training. You can use your social charm to help your business grow. However you should attend to domestic problems when required.

Majority of the planets are in the Eastern independent sector of the birth chart for the Virgo zodiac sign in July 2016. The entry of Mars towards the end of the month will augment your freewill and aggression. However your rashness will be tempered by the planet Mercury. Virgo, you should make a detailed appraisal of your developmental schemes in life and make necessary improvements. 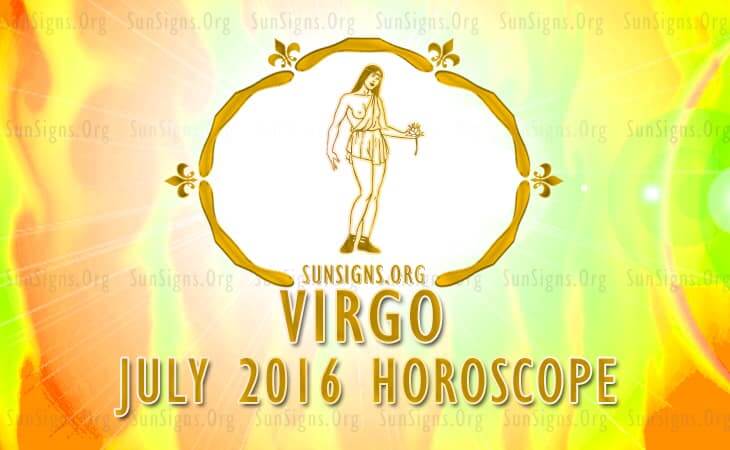 The Virgo monthly forecasts for July 206 predict that Mercury, your ruler is will impact your career growth. Things will be sluggish and you will not be happy with the pace of things.

New job offers and business propositions should be examined thoroughly before making a decision.

Monetary situation will be wonderful during July 2016 for the Virgins due to good planetary positions in your horoscope. People will be enamored by your financial shrewdness and your expertise will be appreciated by others.

Professional Virgos will get salary hikes. Business earnings will come with the help of family members and through government contracts. The calculative Virgo personality traits will play a major role in the way you make financial assessments.

The Virgo July 2016 astrology predictions suggest that prospects of love are better this month. A stormy relationship with your spouse will result in disharmony. You should make necessary compromises and move ahead.

You need to be highly tolerant as planetary support is not forthcoming for pregnancy or committed relations. Single Virgo men in love should allow love relationships to grow slowly. You should not make any major decisions regarding marriage or divorce in July 2016. Here are a few signs that you are dating a loser.

Health will get better for the Virgo in July 2016 compared to the previous month and can be boosted by daily walking and rigorous physical training. You are advised not to make serious transformations to your diet and fitness regime depending on your body type as you do not have assistance from planet Mercury this period.

Presence of Mars in Virgo will make you livelier and your vitality will increase immensely. If you are interested in sports and athletics, you will stand out with your performances. You will have better personal charm which will attract others easily.

To conclude, the Virgo monthly forecasts for July 2016 predict that this will be a personally fulfilling month though relationships will need your special touch to be peaceful.