July 2016 Horoscope for Aries foretells that family and emotional aspects of life will be predominant over career and professional issues. You should use your psychological strength to visualize about the future of your career goals and how to accomplish them.

House of Family is quite powerful for the Arians and there is conflict between family and career. The confusion will be removed by the 17th of the month.

In July 2016, the Aries star sign people will need to be socially active in order to attain their objectives. Your freewill and confidence have to be curbed for the present. Personal interests will give way to the welfare of others and you will have the support of other people. 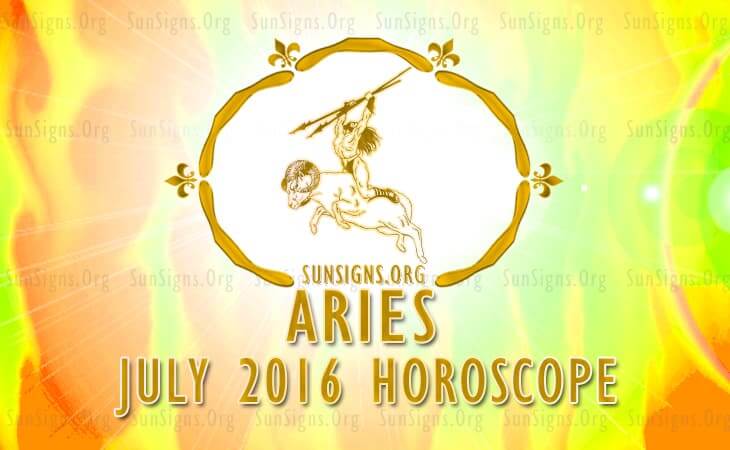 Aries, you should accept delays in your career development during July 2016 due to planetary disturbances.

Use this period to make future business plans and for charting out the course of action to execute your schemes.

The July 2016 monthly Aries astrology predictions forecast that your earnings will improve this month due to the favorable aspect of Venus.

Finances can be boosted by good communication and proper marketing techniques. Financial opportunities are to be found nearer to home.

Support of elders, friends and family members will be available in a large measure for your monetary projects. The financial judgment of the Rams will be powerful and is dependent on their right frame of mind.

The July 2016 Aries love horoscope predicts that you will feel more connected with your children and their activities. Venus is benevolent this month on love matters. Single Arians will be able to form relationships in academic and local environment. Harmony can be achieved with the family members with proper communication.

You are looking for emotional support from your spouse and family. There will be more enjoyment, sex romance with your spouse. This is a good time for the Aries to plan for a pregnancy.

The 2016 horoscope rpedicts that health will be delicate till the 22nd July for the Arians and requires sufficient care. You need to improve your ways of relaxation. Working intelligently and on vital things is necessary. Proper diet will keep you fit and will help to boost your vitality after the 22nd drastically. The month is not ideal for making major changes in your exercise and weight loss diet programs.

To conclude, the Aries monthly July 2016 horoscope warns you to take care of your health and plan well for your future.