January 2017 Taurus Horoscope foretells that the emphasis will be on your career and professional objectives this month. Family concerns also will be active because of the 2017 Mercury retrograde.

Your family will be highly encouraging in your career activities. There will be major changes on the house front with important restorations and renovations.

The 2017 monthly horoscope prediction forecasts that January 2017 will keep you on your toes, Taurus. You have to be pragmatic and level headed to face the hectic changes in life.

The bulls should be more flexible and use their social intelligence to achieve their goals. This is not the time to be arrogant or independent. 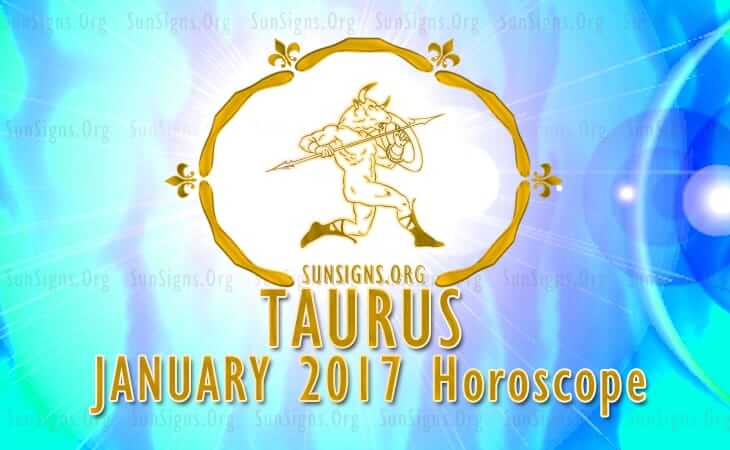 The horoscope for 2017 predicts that you should be ready to face significant changes in your career environment. The pleasant changes may simultaneously involve change of residence.

Taurus personalities looking for employment will be successful towards the end of January 2017. Success in career will not only give you emotional satisfaction but also will enhance the prospects of the family. Your family is firmly behind you in your professional and business accomplishments.

Taurus, all major financial changes and investments should be postponed till the middle of January 2017. If you are dabbling in the stock market, hold your reins till the second half of the month. You will be practical and materialistic as far as monetary matters are concerned.

The earnings of the Taurus zodiac sign in January 2017 are supported by family and overseas ventures will be highly profitable.

The Taurus January 2017 astrology predictions suggest that family relationships and social activities are steady. Love relationships tend to be more sexually passionate than romantic. Read about Taurus sexuality traits. You might even plan to have a baby this month.

Health and vitality will be powerful for the Taurus born till the fourth week of month of January 2017. It is time to take sufficient breaks after the 20th of the month. This is a great time to go on a vacation with your spouse.