January 2017 Scorpio Monthly Horoscope predicts that the planetary aspects for your career are powerful this month. Hence both domestic and psychological matters and career will be equally important during January 2017 for Scorpio born individuals. A shift in residence is likely.

Initially in January 2017, the Scorpio zodiac sign will be able to take independent actions and can be enterprising. Things will change as the month progresses and you have to depend on the assistance from others. 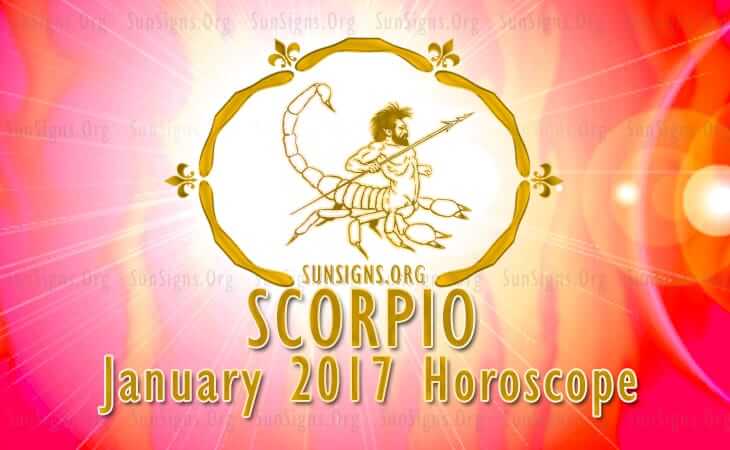 The horoscope 2017 predicts that there may be a shift in work place for the Scorpio personality necessitated by family concerns. The period after the January 2017 Mercury retrograde is favorable for your job.

You will achieve success in your career and business only after that. Scorpios involved in academics and sales promotion will be highly successful during the latter part of the month. Professionals will be able to land jobs with better earnings in January 2017.

The Scorpio zodiac forecasts for January 2017 foretell that monetary situation is exceptional this month. Scorpios involved in stock market will make money. You can expect money from unexpected quarter in the third week of the month.

Money can be made by the Scorpio personality with investments in property and scientific areas. Family will support your fiscal decisions. Social contacts will help your financial progress.

The monthly 2017 horoscope predicts that single Scorpions will find their soul mates while following financial goals. Love is to be found in close quarters after the first week of January 2017.

The 2017 love predictions forecast that social life is active for the Scorpio man and Scorpio woman in January 2017. You will be involved in the improvement of the social environment in your neighborhood. Senior members of the family may face hurdles in their marital lives. But married couples will be sexually compatible with an inclination towards pregnancy in January 2017.

Health will not pose any problems for the Scorpio sun sign till the latter part of the month. And it can be enhanced with sufficient relaxation and alternative healing after that.

The Scorpio January 2017 horoscope predicts a month of success in profession and good social relations.