Sagittarius January 2017 Horoscope predicts that emotional matters and domestic issues rule over career and family affairs this month. You can use this period to plan your future career targets.

Atmosphere at homes of the Sagittarius zodiac sign people will be highly disturbing. Family members will be at loggerheads. It requires lot of effort and tolerance on your part to maintain stability on the home front.

January 2017 horoscope predicts that this month will give you an opportunity to be independent and execute your plans the way you want, Sagittarius. You have the liberty to change your strategies as you want in this January month. There is absolutely no need for the Sagittarius personality to listen to others’ advice. Forward momentum in your life is very strong with most of the planets surging ahead. 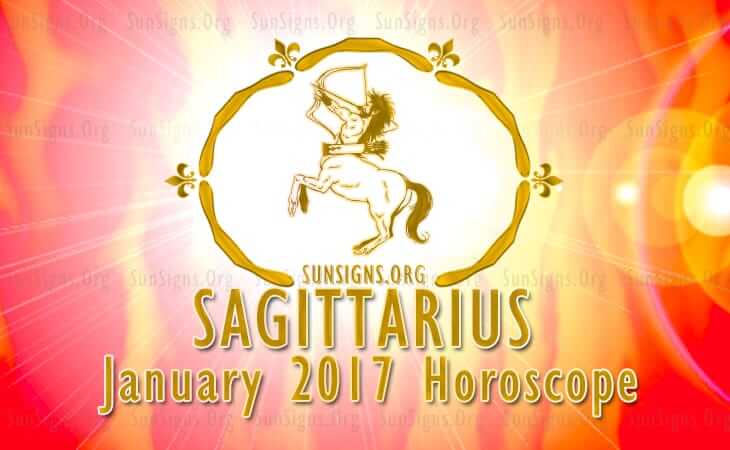 Professionally, the Sagittarius born will be more successful after the Mercury retrograde of January 2017. All major career and business choices should be done after that.

As psychological factors are stronger, your decisions should depend on emotional comfort and keeping family interests in mind. The astrology 2017 forecasts suggest that Archers seeking new job opportunities have an excellent period.

The monthly forecasts for 2017 foretells that monetary situation is fabulous throughout the month of January 2017 for the Sagittarius sun sign. Money is to be made professionally and with the help of other people. Your partner will encourage your financial efforts. Period up to the end of January 2017 is beneficial money-wise.

Sagittarius, you need not run after love as love will be chasing you in January 2017. Maybe you will even think of dating your ex lover again. You have to look for commitment in romantic partnerships. Relationships with siblings and family members will be harmonious.

The 2017 love predictions foretell that all significant decisions regarding Sagittarius marriage alliances should be made towards the mid of January 2017.

The health of Sagittarius people will not pose any problems during the month of January 2017. You should be careful about overindulging in life becoming obese and overweight. Sportsmen will have good fitness this month.

The January 2017 Sagittarius monthly horoscope predicts some turmoil in your family but you will make a lot of progress in your business and job.