Capricorn January 2017 Horoscope foretells that the emphasis will be on emotional strength and domestic issues this month. This will give you an opportunity for you look at career prospects with a stable mind. You can dream about your future career targets and work out a plan of action to be executed in January 2017.

Planetary power is located in the Eastern half of the chart for the Capricorn zodiac sign in January 2017. Hence confidence and enterprise should take over flexibility and consensus. However the House of Other People or the 12th house is also very powerful.

So you have to use your determination along with support from other people. Aspect of Saturn is not favorable and hence a certain amount of caution is required while executing your plans during the 2017 Mercury retrograde. 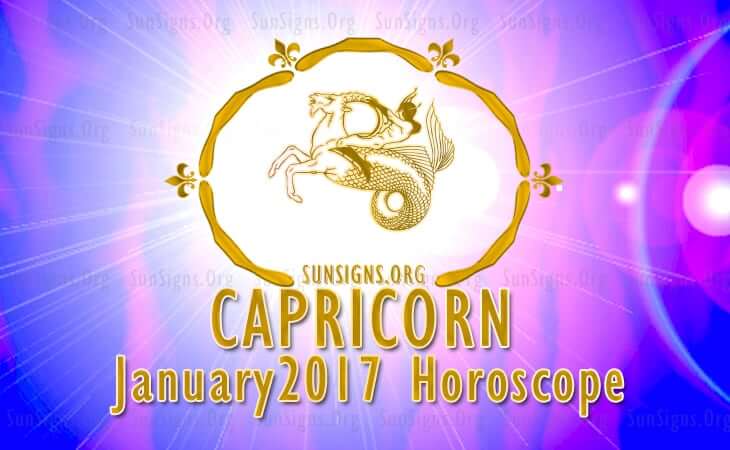 The January 2017 monthly horoscope for the Capricorn star sign also forecasts that the pace in your life and professional commitments will be frenetic. You have to move against your nature of restraint at times. It is a month of contradictions for the Capricorn personality. You will be successful in getting a job or new business deals after the 10th if you are looking for one.

The 2017 astrology forecasts suggest that finances are extremely strong, probably the best in 2017 for the Capricorn birthday born. Your prosperity will increase enormously.

Your financial intelligence is very strong and whatever investments you make will turn into gold in the month of January 2017. Flow of money is sudden and you will spend money on personal luxuries. You should accept all this cash flow with humility and grace, Capricorn.

The 2017 love horoscope also predicts that the focus for the sea goats will be on establishing harmony in relationships. This has to be done in balance with enjoying the luxuries showered on you by your prosperity during the month. Do not forget to pamper your spouse both emotionally and sexually. This might also be an auspicious month to get pregnant.

The monthly horoscope 2017 predicts that health will be superb during January 2017 for the Capricorn born. All existing diseases are likely to vanish. Your immunity and vitality levels will be very high. Your appearance will also be attractive because of your sound health. Here is a list of detox foods that will help you.

The Capricorn January 2017 horoscope predicts a stable month both in terms of your love life as well as career.