January 2017 Cancer Horoscope predicts that the crabs will be focused on their career this month. Professional success in life will be more important than family and domestic concerns. Of course family also has an important place in life but this month it will take a backseat for the Cancer zodiac sign.

Cancer, your personal wishes and actions are immaterial this month. Other people and their actions will determine the course of your life during the month of January 2017.

However if you do not want any turbulence then you have to move with the current. You should adapt yourself to the situation. The crab will have to keep their self-will and action in the background during the period of 2017 Mercury Retrograde. 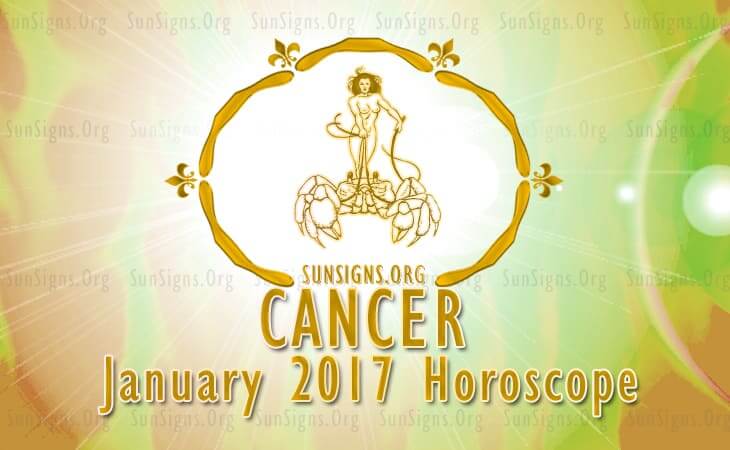 The 2017 astrology predictions for the Cancer sun sign foretell that life will be hectic on the career and business front. It will be wise to relax as much as possible to conserve your energies. Second and third weeks of the month of January are favorable for executing major business projects.

The Cancer 2017 January zodiac predictions forecast that finances will be excellent during the month. You might also receive unexpected a bonus at the work place or in business. You should spend your earnings wisely. Monetary prospects improve towards the end of the month.

Your financial intelligence gets a major boost in January 2017. Money position is dictated by social environment. All work projects will be socially oriented.

The Cancer monthly predictions for 2017 January forecast that love will be excellent during the month and will be controlled by you. Your spouse is ever ready to gratify you sexually and mentally. Your social engagements may prove an obstacle in your love life. You may be put off by the dominating attitude of your spouse. You might be even interested in planning for a baby.

Health of the Cancer personality needs proper care till the month end. It is better to avoid a stressful life at the work place and in social life. You have to strive to keep your emotional health in shape in addition to the physical health. Problems related to burning feet might plague you this month.

Overall, the January 2017 Cancer horoscopes foretell of a period of flexibility and adjustments for those born on Cancer birthdays.