Virgo January 2016 Horoscope predict that home and home affairs will be of primary concern as planetary power is concentrated in the Southern half of your 2016 horoscope. Your efforts will be directed towards the betterment of family members. The time is ripe for analyzing your previous achievements in life and make corrections with formulation of new projects and strategies.

The social charm and adaptability of the Virgo zodiac sign will be important rather than your free will and self-rule. You will get fabulous suggestions from others and a better insight into the minds of outsiders. You can achieve your objectives by collaboration and compromise in January 2016, even if Mercury is in retrograde.

The Virgo 2016 January monthly predictions foretell that professionals and businessmen will have a pleasant environment at the office and will take pleasure in working. You will be connected with humanitarian causes. People seeking employment will be able to land good jobs. 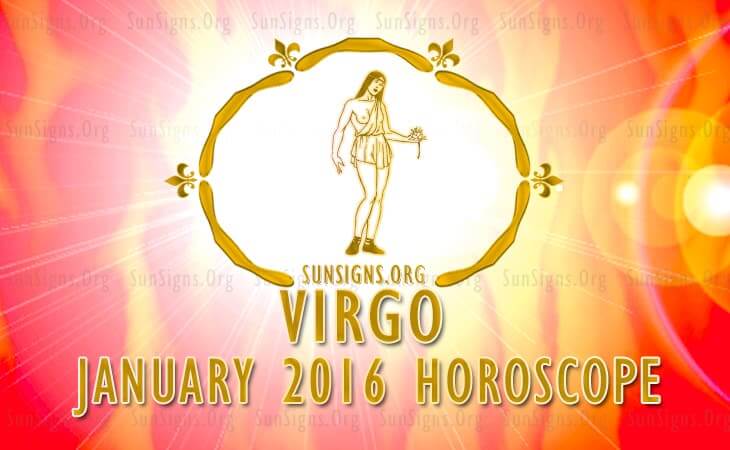 Finances will be delicate in January 2016 and there is a considerable decrease in the earnings for the Virgins. Hence it makes sense to avoid costly purchases. You will have enough time to review your strategies and formulate new ones to enhance cash flow.

Monetary situation will in all probability improve after the second week of the month. Social contacts will provide the financial impetus and sudden cash flow from unknown sources is likely after 14th.

The Virgo January 2016 forecasts suggest that this month will require your devotion towards members of the family. Health problems are expected and home atmosphere is turbulent. Harmony in the family has to be restored.

Singles will have abundant opportunities to forge love relationships. Divine forces are at work to make love and sex enjoyable. Love happens unexpectedly after the second week of the month. You will find love mates in official and social parties, or while doing charitable work. However there is no real commitment in these affairs and online dating sites. But this is a good month for married couples to plan for babies.

The January 2016 health astrology predictions foretell that health will not pose any major challenges this month. You will be driven with high voltage energy till the last week of the month and you will have the usual fitness in the last week.

To conclude, the 2016 January horoscope for Virgo predicts a month filled with personal activities.