The Taurus horoscope for January 2016 predicts that the emphasis will be on your professional life and personal accomplishments. This is the right time for the Bulls to execute their earlier plans worked out meticulously for career advancement. Domestic concerns are not that important in January 2016.

Planetary power is shifting from the Western half to the Eastern half of your birth chart by the third week of the month. During the first few weeks you have to strike a harmonious equilibrium between social grace and personal independence. After 22nd, it is all about your free will.

Taureans interested in spirituality and overseas travel will have a favorable time in January 2016. And they can pursue their interests with zeal during the month.

The 2016 January monthly astrology predictions for the Bulls show that professionally this is an excellent month. Your family is fully behind you in the attainment of your career goals. You will have a pleasant and homely environment at the work place. By end of the month, you will have a clear picture about your career advancement and you will be free to take the necessary decisions.

You will be involved in social charities and in helping the needy people. You will achieve career success with the help of your family, superiors and social contacts. All this will be possible if you are diligent and practical in your approach towards your job and work. 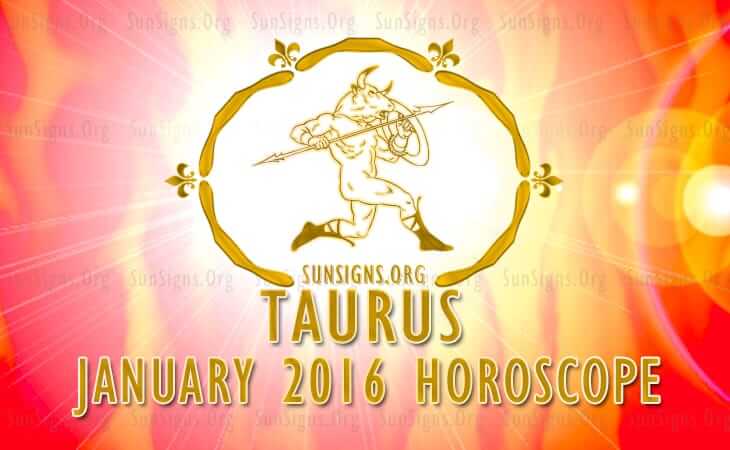 The Taurus January 2016 forecasts show that monetary prospects are pretty good during the month and there will be a good flow of money throughout the month. Investors will find their projects becoming profitable if they put their money in realty and stocks of good companies.

Job professionals will be rewarded with financial benefits during the last week of the month. Family members will become wealthier during this period. Overseas deals will yield good returns for the Taurus zodiac sign in January 2016.

The January 2016 Taurus love horoscope predicts that no major events are expected in your love life during the first two weeks of January 2016. Second half of the month will be troublesome for married couples and there will be minor squabbles. Problems will evaporate gradually but love will be low key. Pregnancy or news related to children will not be favorable.

The 2016 January Taurus predictions foretell that health in general will not pose any major problems till the last week of the month. Fitness for Taureans can be improved by sports and by a regular regimen of exercise.

To conclude, the Taurus January 2016 horoscope predicts a month of execution of previously made plans.