January 2016 Pisces Horoscope predict that profession and personal accomplishments will dominate over home and family issues. You should upgrade your skills to further your career prospects. The whole family will be behind you in your efforts to attain your objectives in your profession or business. Do not hesitate to take risks and be prepared to face the challenges you are likely to face. That is the real way to success in this time of Mercury Retrograde 2016.

Basically the Pisceans are inclined towards spirituality and your emotional strength will improve profoundly during this month. You will be involved in humanitarian and spiritual engagements and your extrasensory perception will be extremely strong.

Planetary strength is concentrated in the Eastern half of the chart in January 2016. You will be able to guide your life as per your wishes and are not dependent on others. You should be strong enough to follow your own path and act on your objectives stubbornly. 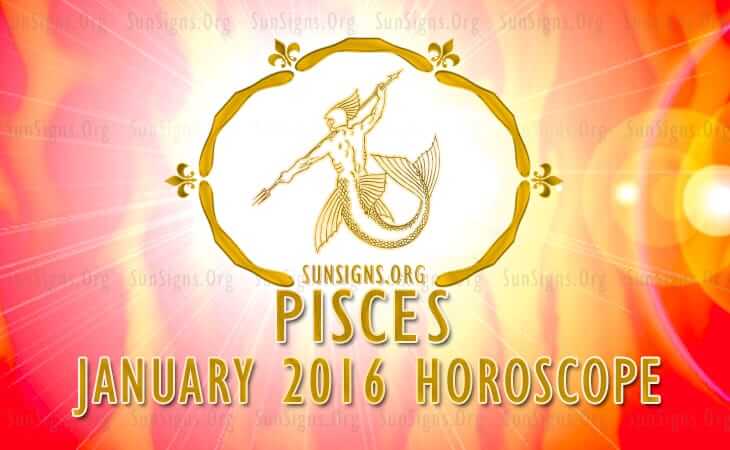 The 2016 January career horoscope for Pisces foretells that professional and business matters will be important during the month. But slowly the focus will shift towards emotional and domestic issues by month end due to changing planetary aspects.

The astrology predictions 2016 show that financial situation is intricate during the month for the Fishes. A new large project you have started may prove tricky and there may be financial implications on the negative side.

You should lay more emphasis on marketing your products to improve your profits. Your tendency to take risks in financial deals may create some turbulence before 20th. Situation will become profitable during the last week of the month.

The love forecasts for January 2016 predict that singles will be looking for perfect love during this period. Opportunities for romance are plenty and you can look for partners in various places with full optimism.

Relationships are possible in the work place, social gatherings or in your friend circles. You are looking for a partner who has same religious or spiritual interests as yours. This month is auspicious for marriage and pregnancy.

The 2016 January Pisces horoscope forecasts that no major glitches are likely in your physical health during the month. You can remain fit by proper exercise and diet regime and by using home remedies for all minor ailments.

To conclude, the 2016 January horoscope predicts that people with a Pisces birthday will have a joy filled and prosperous month.