The Leo Horoscope for January 2016 shows that majority of the planets are in the southern half of your birth chart. Divert your attention to maintain calm and peace in the domestic environment and work for inner tranquility. Career concerns do require some consideration, though some challenges persist in spite of your diligence.

This month is for inter-dependence rather than independence for the Leo zodiac sign. Interests of others take precedence over personal goals. You should seek the cooperation of your social contacts to attain your objectives in life. The Lions should use this opportunity to get into enjoyable relationships in January 2016.

January 2016 will offer many opportunities for Leos to help others with their well-known management skills. People seeking employment will be able to get jobs easily. Proper scrutiny of jobs is necessary before committing yourself to the new business assignment. Professionals will be required to travel for work extensively in pursuit of their targets in January 2016. 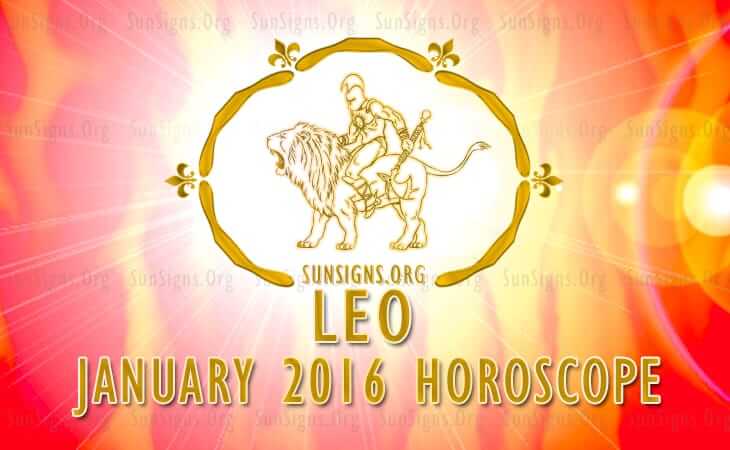 The January 2016 Leo finance horoscope predicts that fund flow will be plentiful during the month. You are also generous in spending money. First week of the month will yield good profits from secure deposits as well as from stock market. Your financial acumen improves after 12th, and you will be prudent in spending. Lions connected with fine arts will be able to generate money from their creative activities.

You can expect your life partner to make additional income after the third week of the month. Finances will accrue from your social connections.

The 2016 January love astrology forecasts for the Leos foretells that you will have a very strong bonding with your spouse and love life will be enchanting. There is purity and devotion in the relationship. You will be having a great time with your spouse attending parties and social gatherings.

Single Lions will be faced with the problem of plenty in forming new love partnerships. Planetary influences may offer you with creative and sexy choices. Permanent relationships should be postponed to a later date as planets are not favorably disposed due to the 2016 Mercury retrograde.

Physical health will be on the priority list of the Leo personality during January 2016. You will be gifted with excellent health till 20th. Attend to minor ailments promptly after 20th and sufficient rest will be necessary.

To conclude, the 2016 January Leo monthly predictions suggest that you take life easily and go slow when it comes to making important decisions.