Cancer January 2016 horoscope predictions indicate that career and personal improvements are more important than home and family issues. Social assistance and help of other people is instrumental in the achievement of your objectives. Independence and self-will will be not that relevant for the time being for the Crabs in January 2016.

The Cancer zodiac sign will be engaged in a drastic makeover in the way you look and in your personal appearance. You will be passionate and look for enjoying life to the full in January 2016. There is a continuous effort to look different from others by resorting to new routines for physical fitness or wearing unique costumes and jewellery.

The Cancer January 2016 monthly forecasts foretell that professional life will be subject to major challenges because of corporate changes or due to stiff competition within the business circles. This phase will be temporary and people in jobs will eventually be successful. 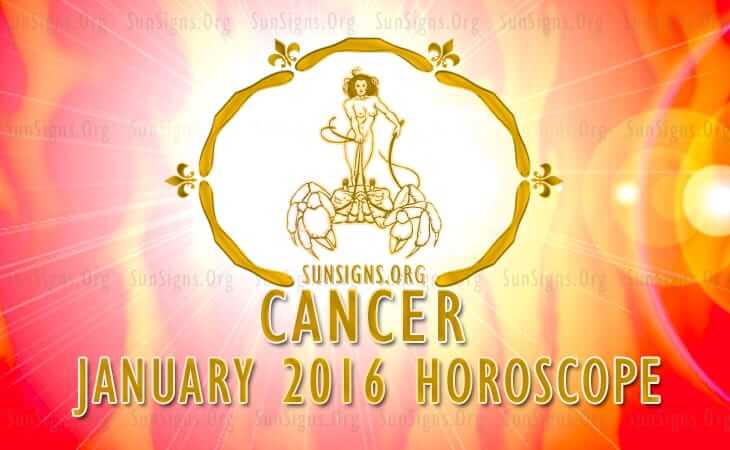 Cancerians will have to struggle hard to keep the cash flow intact during January 2016. Money will be irregular till 20th of the month during the 2016 Mercury retrograde, but will radically improve after that. Your social contacts will assist you to enhance the income and you should use the surplus to clear outstanding loans and improve your balance sheet.

Cancerians will be involved in philanthropic causes and social charities. This will in turn improve your money flow through influential people and you will come out with ingenious plans to increase wealth. Additional support from your spouse will boost your finances.

The January 2016 Cancer forecasts also show that love life is undergoing stress due to your excessive attention to career. However family will support your endeavor to achieve your professional objectives.

Singles will find it hard to get into love partnerships unless they extract time from their busy work schedules. It is important to give equal importance to both personal relationships and professional responsibilities. Your family members may not be supportive of your new alliances especially when you have one night stands for sex. People planning to have babies might have to wait for some time.

The Cancer January 2016 horoscope warns that health will be under stress till 20th of the month due to professional reasons. You should try to relax while working hard by resorting to a planned and intelligent schedule.

To conclude, the Cancer astrology predictions for January 2016 asks you to be careful and take extra measures to ensure that your professional life doesn’t spoil your family life.