January 2016 Aquarius Horoscope predicts that you will be independent and direct the course of your life as you wish. In January 2016, your self-will will prevail and you need not depend on your social skills or the grace of other people. There is a limitless sense of optimism and you feel that you can rule the world outside.

This month is propitious for starting major ventures for the Aquarians, though this may drain your physical resources. You will be interested in enhancing your personal looks and image. There is an undercurrent of exceptional vitality which may force you to become overly sexually passionate.

January 2016 horoscope also shows that emotional and home affairs will rule over profession and business matters. Your spiritual strength can be improved enormously to take care of your ambitions. 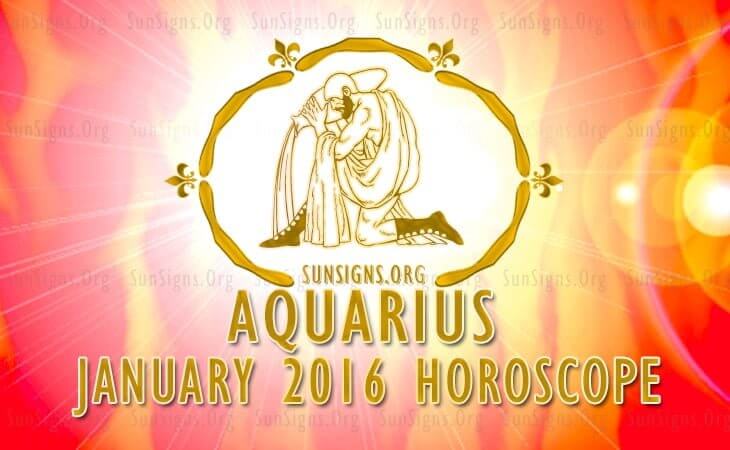 Professional concerns are important for the Aquarians and cannot be overlooked. Your professional success will be governed more by inner happiness than outward success.

January 2016 is an excellent month for personal finances for the Aquarius star sign. Your financial acumen will be extraordinary and you will be hounded by monetary prospects even as you are chasing your financial dreams. End of the month will see cash flowing from unexpected sources for businessmen.

You will splurge money on personal luxuries. Support of family members in your fiscal ventures will be readily available after the second week of the month. Investments in fashionable goods and real estate will yield handsome returns.

The 2016 January Aquarius predictions also forecast that love will be chasing singles after 20th. You should be wary in getting entangled in permanent relationships right now and focus more on nurturing your love leisurely.

Married people will enjoy the relationship and your spouse will be delighted to sexually gratify you. Your energy levels are extremely high and there will be plenty of romance and passion in your love life. This is a good month to plan for a pregnancy.

Health will be fantastic during the month for the Water Bearers. You will be more charming with enhanced vitality. Stick to your normal diet and exercise, and avoid major changes to your routines.

To conclude, the January 2016 Aquarius forecasts suggest an overall optimistic and positive month.