February 2017 Horoscope for Taurus zodiac sign forecasts that the House of Career is very strong with a number of planets in it. So the profession will be very much in focus for Taurus born individuals during the month of February 2017. Family members also will taste success. There could be a change of residence. You have to take care of the family concerns in spite of your career focus.

Taurus, you are changing from a period of flexibility and consensus to one of enterprise and personal initiative in February 2017. You are free to exercise your will and the need for social skills will become less. You can decide based on your wisdom and seek the help of others when required in February 2017. 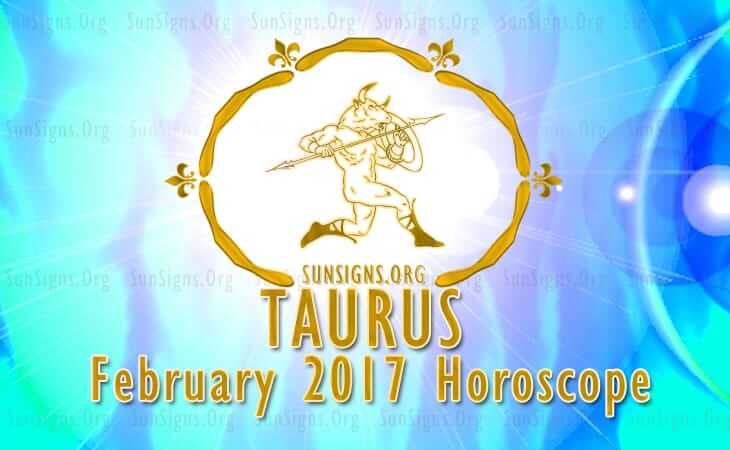 The astrology 2017 predictions for the Taurus born shows that career will be the main arena of action this month. You can expect monetary rewards and improvement in status in your job. Your hard work will be appreciated by the management. You can look for better jobs and you will be highly motivated to accomplish your career goals.

Planet Mercury is highly favorable in its aspect this month for the Taurus personality. Monetary situation will be fabulous and your financial intuition is excellent in February 2017.

The monthly horoscopes 2017 predict that Taurus will have very good earnings and money flow will be smooth and plenty. Money will come from all sources such as from profession, investments and with the help of family members. The bulls will get bright ideas for investment which will yield results in the future.

The February 2017 Taurus love horoscope predicts that love takes a backseat this month as you are busy socializing to improve your career and fiscal opportunities. Single Taureans will find love at the office or in professional circles. Marital life may be volatile after the mid of February 2017. Pregnancy needs to be planned after discussions with your spouse.

Health will be quite delicate this month for the Taurus zodiac sign. You should try to work smartly and save as much energy as possible. Rest and relaxation are very much important. The health benefits of simple kitchen ingredients will help you in February 2017.

The Taurus February 2017 horoscope forecasts that you will need to take care of your health and at the same time not take stress at your work place.