February 2017 Horoscope for Pisces zodiac sign shows that this will be a month of professional commitments. Your attention will be centered on career. Family issues can be tackled as and when they arise.

Majority of the planets are in the Eastern part of the birth chart for the Pisces born in February 2017. Self is more prominent than others. This is the time for personal enterprise and motivation to succeed in your ventures. You can create your own happiness by attaining your targets in life. You can dictate your terms to others and go your own way.

The monthly 2017 horoscope predicts that spirituality rules your life in February 2017 and the Pisces personality will definitely like it. You will be lost in your own visions and will be fully involved in spiritual studies. You like to decipher the meaning of life and the connection between the human and the divine. Past Karma and present actions come under your scrutiny. This will naturally lead you to humanitarian and social work. The horoscope 2017 prediction warns that spiritual seminars and guides will draw your attention. You will be happy to allow the Supreme Power to guide your life and actions in the month of February 2017. 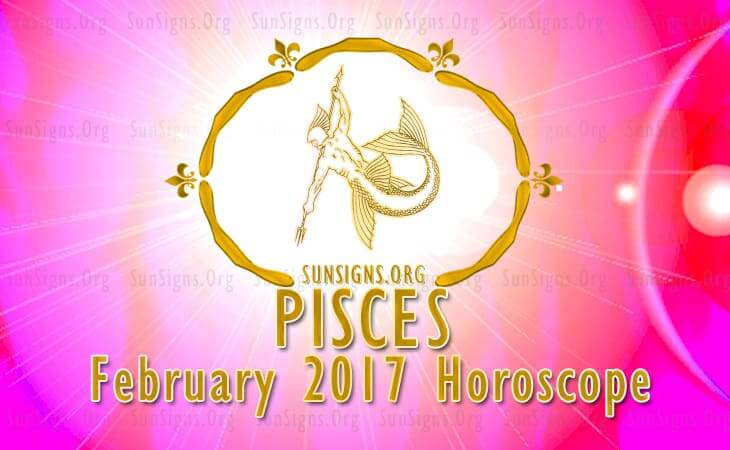 The February 2017 Pisces horoscope predicts that career and business ventures will be excellent this month for the Fishes. There will be a touch of spirituality attached to it.

Planet Mars is not favorable to you this month, Pisces. Financial ventures require sufficient caution in February 2017. You can reformulate your monetary plans and may even seek the help of spiritual masters.

The Pisces February 2017 astrology predictions foretell that love will be easy and natural this month. Single Pisceans look for spiritual strength while getting into love partnerships.

Love is to be found in spiritual places. Married people will have a harmonious family life based on spiritual compatibility rather than sexual. Pregnancy related matters will need to be discussed with your spouse.

Health will be fabulous in February 2017 for the Pisces star sign. Your energy levels will be very high. You look beautiful and dress attractively which will enhance your personal appeal. People, not involved in spirituality, may over-indulge in drinking and sensual activities which will spoil their health.

The Pisces February 2017 monthly forecasts suggest a month in which indulgence of any kind will need to be kept under control.