Libra February 2017 Horoscope predicts that the predominance of domestic concerns and emotional aspect of life is seen this month. As the House of Family is powerful, family environment will be harmonious. Career and professional life will be supplemented by a pleasant domestic life for the Libra zodiac sign.

In February 2017, interests of others will come first and you can attain your objectives through cooperation and collaboration. This is exactly what the Libra personality like.

February 2017 happens to be one of the excellent periods in your life, Libra. You will get opportunities to enhance your intelligence and communication abilities. These talents will be recognized and highly appreciated by others. It is advisable that you should not be lost in your talking marathons. You have to concentrate on achieving the necessary objectives.

Forward motion of more than 80 percent of the planets during the month of February 2017 will make the Libra birthday person’s life hectic and lot of things can be accomplished to your satisfaction. 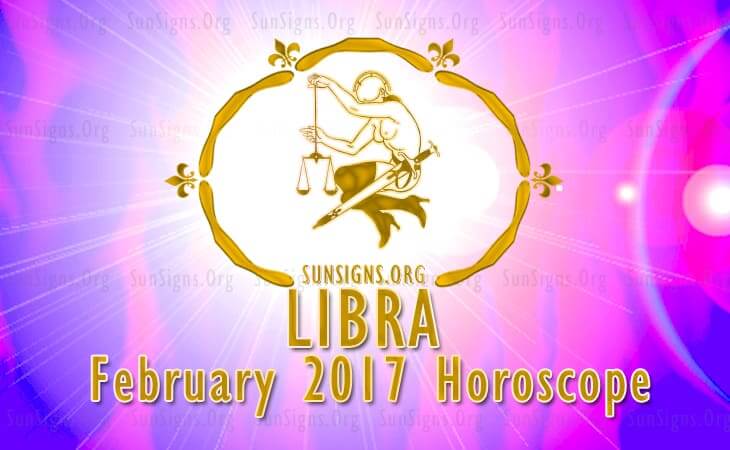 The February 2017 Libra monthly astrology forecasts you will match your diligence with fun and entertainment in your professional field. People seeking employment have exceptional opportunities to get jobs. This may happen while playing a game or having fun in a social gathering in the month of February 2017.

Monetary situation for the Libra zodiac sign will be superb in February 2017. You can make money by using your imagination and by sales promotion. You can earn money by making risky investments and by dealing in property. This month is fabulous for Librans in the fields of academics and creativity. Family members will help you become prosperous. You should exercise caution while lending money to others in February 2017.

The 2017 horoscope for the Libra zodiac forecasts that you will get ample opportunities to get into love partnerships. Existing love relationships may face some turmoil. Socially life will be exciting. Family life will be full of partying and fun. Pregnancy too might be planned in February 2017.

The February 2017 Libra monthly predictions foretell that health will show remarkable improvement this month. Your interest in activities to boost health will yield beneficial results. Energy levels will be higher and you should take steps to conserve energy by relaxation and entertainment. Here are some detoxifying foods that can help you.

The Libra February 2017 horoscope predicts a month of complete action both in your professional and personal life.