Leo February 2017 Horoscope predicts that this is the right time to forge ahead with your career plans and attain success. Psychological issues and family concerns can be on the back burner for the time being.

The 2017 February predictions foretell that personal will and independence of the Leo zodiac sign will have to be low key. Social charm and compromises are required to accomplish your targets in life. You can achieve your goals by socializing and by attending parties and professional gatherings.

Also, delightful and unexpected events will happen in February 2017 for the Leo personality. It is time to be blown away by these pleasant experiences. Your personal preferences can be forgotten for the time being. You can freely engage yourself in romantic activities and social partying. 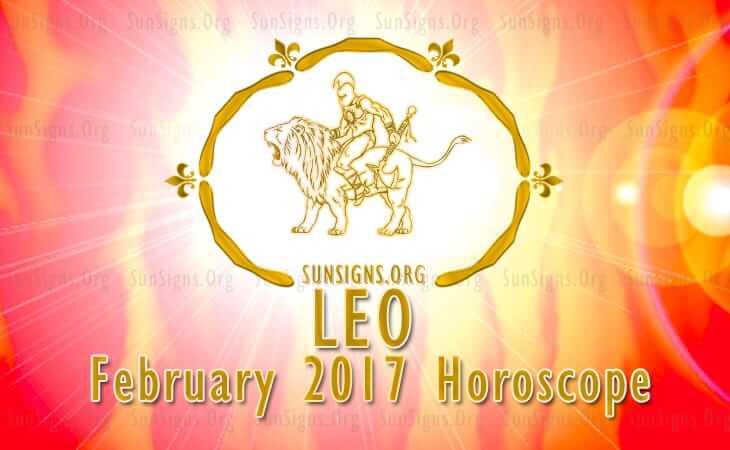 Astrology 2017 forecasts for the Leo personality foretell that career success can be accomplished by diligence and through social networking. Lions seeking employment will have a favorable time. They should take up jobs or start businesses in line with their aptitude and skills.

The February 2017 monthly predictions for the Leo born show that financial situation will be enhanced this month compared to the previous month. Money can be made through family support, social connections and social meetings. Planet Mercury is favorable for your monetary success in this month of February.

Leo, you will be busy with parties and social engagements with your spouse during this month. Single Leos will have plenty of opportunities to make new love connections. People already in serious relationship will get chances to confirm their love through marriage and pregnancy in February 2017. Get your Chinese 2017 Horoscope.

The Leo fitness and health will be delicate till the 18th of February 2017. Health can be augmented by fitness exercises and relaxation. Vitality will be high and it is wiser to control your sexual activities.