February 2017 Cancer Horoscope predicts that career and worldly success is more important than domestic concerns and psychological matters this month. You depend on the support of other people to accomplish your objectives.

In February 2017, the planetary power is situated in the Western half of the birth chart for the Cancer zodiac sign. So social intelligence becomes important and your own enterprise and strengths are secondary. You have to be flexible in your approach, and use your social charisma to attain your objectives in life.

Cancer, in February 2017 your communication skills and logical aspect of your intellect will be highly prominent and there is no place for emotions. You feel that things are happening without your control. You should just flow with the current of life. That is the only way to succeed for the Cancer personality this month.

Cancerians seeking spiritual knowledge and academic excellence will do well after the 18th of February 2017. Overseas travel for educational purposes is also bright. 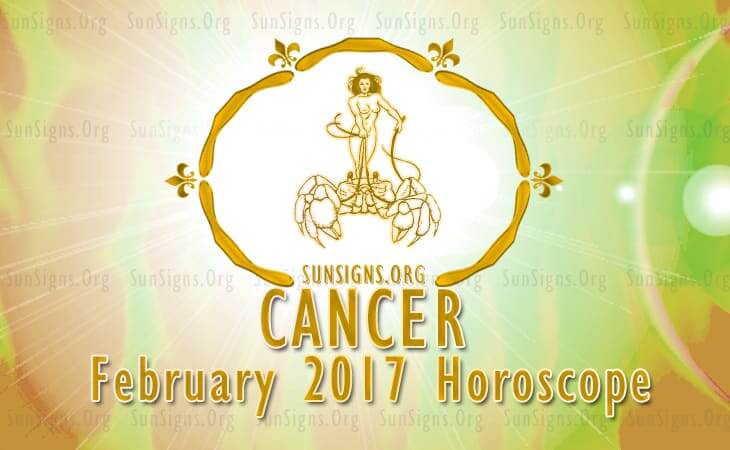 The horoscope 2017 for Cancer sun sign foretells that career has a highly social touch to it in February 2017. You can advance in your business by attending social gatherings and by partying with influential persons. Your life partner will be instrumental in the progress of your career in this February month.

Cancer, your financial skills will be in use in your monetary dealings during the month of February 2017. Family connections will be instrumental in your fiscal success. Finances are excellent throughout the month for the crabs.

The February 2017 Cancer horoscope forecasts that family environment is extremely harmonious this month. All your career and financial activities are well supported by family members. Your mind will be more on your job than love relationships. Pregnancy related decisions might be delayed in February 2017 for the Cancer born.

The monthly horoscopes 2017 forecast that health shows remarkable improvement this month in February 2017 for the Cancer people. You can boost it further by cleansing your body of impurities. There is more emphasis on augmenting your emotional health. The month is ideal for kicking addictions and unhealthy habits.

The Cancer horoscope for February 2017 predicts that this is a month to concentrate on your health and career rather than intimate relationships.