February 2017 Aries Horoscope predicts that you will be more enterprising and motivated to get things done in your profession or career this month. The Aries personality will put more effort to accomplish their career targets.

The Aries zodiac sign people can use their natural independence and liberty to take action as per their own desire to achieve their goals in life. It makes sense to take along others with you in the journey in February 2017. However any opposition that is undesirable can be put down.

The monthly horoscope 2017 predicts that planetary momentum is also very strong with most of the planets surging ahead in February 2017. But the aspect of Mars is not very beneficial for the Aries born this month. This situation will give you conflicting indications. It will be sensible to move ahead with caution to accomplish your objectives. 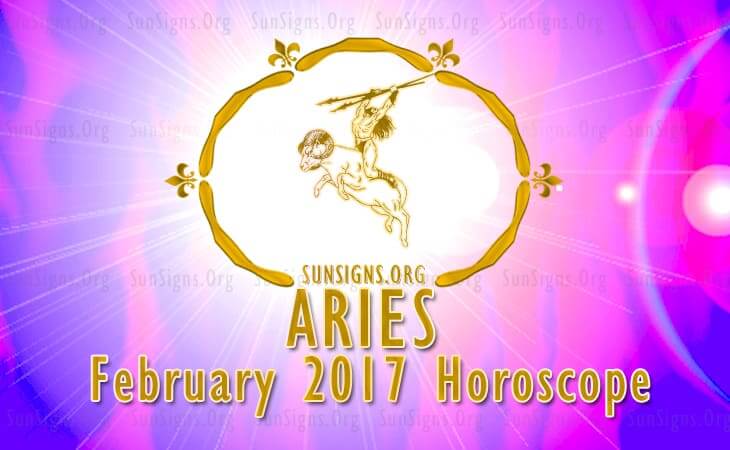 The zodiac signs predictions for 2017 forecast that career prospects for the Arians will be excellent in February 2017. But it will be less challenging compared to the previous month. All your job targets will be met successfully and you can always look for newer things to succeed. Whatever you attain in your business will gratify your emotional needs.

The Aries February 2017 astrology foretells that you will achieve financial success this month by investing in technology. You will have the support of your social connections and technical associations. You can upgrade your work place with new machinery and with more people. Financial intelligence will be every powerful. You will also be assisted by your visions and spiritual guides in making good investments.

The Aries love horoscope for February 2017 predicts that romance is very much in the air during the month. You will have plenty of opportunities to make new love partnerships. You are looking for freedom in love and are not very serious about permanent relationships.

You might even indulge in online dating and flirting. Love is to be found in social gatherings for the rams. Love is more spiritual than physical, but will be highly gratifying sexually. Married couples might start thinking of pregnancy in the month of February 2017.

Health will be fabulous throughout the month of February 2017 without any problems for the Aries sun sign. Energy and vitality levels will be low due to planetary positions. Here are a few foods to boost your stamina.

The Aries February 2017 monthly horoscope predicts a fabulous month on your career front with good support from your family.