Aquarius Horoscope February 2017 forecasts that career issues take a backseat, and family matters and psychological aspect of life will dominate this month. You cannot ignore your profession altogether. You will get an opportunity to streamline the strategies for improving your career prospects in the future.

The Aquarius personality should focus on building up harmony in family environment in February 2017. You should have a strong family base to rest upon in case of problems in life.


Majority of the planets in February 2017 for the Aquarius zodiac sign are in the Eastern sector of the chart. Self dominates over the interest of others during the month of February 2017. You can design your life the way you want and go ahead with the execution of your objectives in life. The Water Bearers will have the encouragement of the family members and friends for their actions.

Aquarius, the zodiac 2017 forecasts also foretell that your life will be full of fun and pleasure this month. You will spend money on enjoyment as well as buying personal luxury products. You should not overdo it in your own interest. 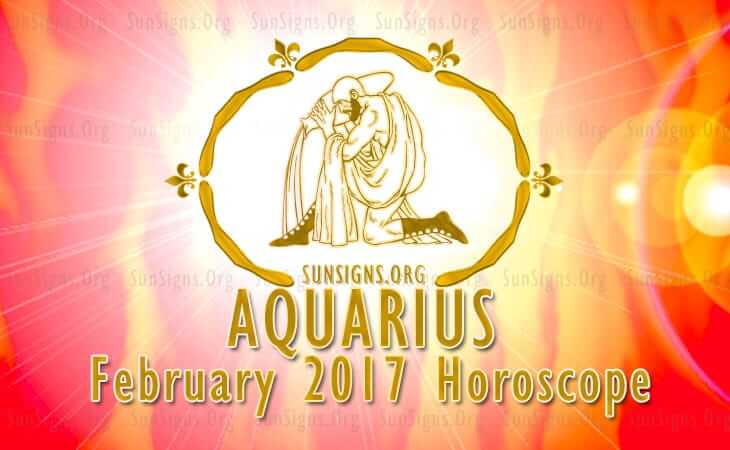 The Aquarius 2017 career horoscope predicts a stable and favorable time at the work place.

Career and business will be good, but other things are more important.

The 2017 monthly horoscope foretell that monetary position is superb in February 2017 for the Aquarius born. Family members and social contacts will help your financial projects to fructify. Investment in property will be profitable.

Money can be made by giving more in charities as whatever you give will be come back in multiples. You will become more prosperous towards the end of February 2017.

Aquarius, your personal charisma is strong to pull as many love mates as you want in February 2017. Love is chasing you this month. Here are a few tips to communicate with your boyfriend.

However you do not like being controlled by your partners. Married Aquarians will look for liberty in dealing with their romantic partners. Cheating on your spouse is a big no-no. Pregnancy and children related issues will be on your mind in February 2017.

February 2017 Aquarius astrology predictions suggest that your health will be superb and you have abundant energy and vitality. Too much energy will make you impatient. You may have problem in taking decisions as to the course you should follow in your life. Practicing yoga will help you have your nerves in control.

The Aquarius February 2017 horoscope predicts a month of taking care of your health and your family.