Sagittarius February 2016 Horoscope forecasts that the emphasis will be on family and domestic matters. As far as career and job is concerned, this is the time to relax and think seriously about the future. You can make your plans and keep them ready.

Till 19th February, the independent Eastern sector of your chart is powerful. You can dictate your course for personal accomplishment and you need not be dependent on others. Planets will start moving to the Western half towards your rising sign and you have to progressively change your thinking to seek the cooperation of others with your social charm.

Sagittarians have been religious and spiritual throughout the year because of planetary influences. In February 2016, your spiritual level will see an upsurge further. Your intuitive faculties will be enhanced and you will be more perceptive. Visions, vibrations and dreams will be the order of the day. You will search for the company of people interested in similar interests.

Archers interested in higher studies will find excellent chances to pursue their ambitions during this period. 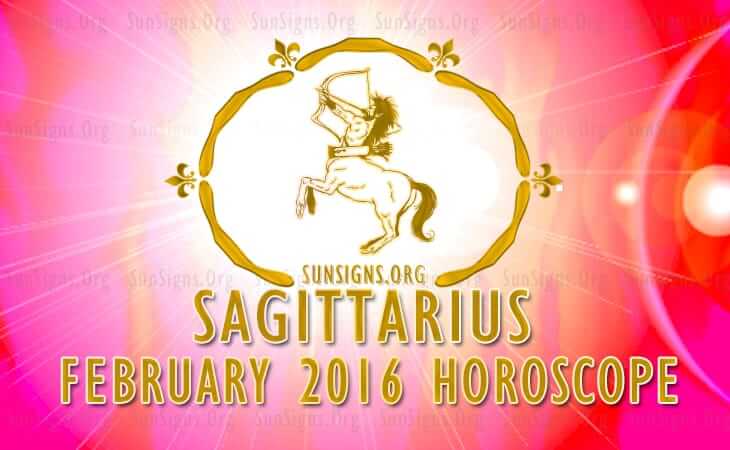 Though family will hog your main attention, the Sagittarius personality cannot neglect your professional responsibilities in February 2016. You try to make as much progress as possible.

New job seekers will have fabulous opportunities during the month and will be employed in jobs they can relish. New ventures in business will materialize.

February 2016 financial predictions for the Sagittarius zodiac sign show a tense situation till 19th. You will see some improvement after that. Planetary aspects are not favorable for big ticket spending or investments.

You will have the support of your associates for your fiscal plans. Make necessary deviations in your monetary plans after proper reassessment. Health may be a major drain on your finances. Your spouse will assist you in your financial activities, foretells the 2016 horoscope.

The 2016 February 2016 Sagittarius horoscope says that singles will form love partnerships in close circles with the help of relatives and elder members of the family. Existing Sagittarian relationships will face challenges and only strong ones will survive.

One of your old love mates may come into your love circle again, but the relationship may not last. Marriage compatibility between couples should be strong if you are planning to have a child.

Health will be fragile for the Archers after 19th February. You should try to conserve your energies and focus only on necessary activities.

To conclude, the 2016 February monthly forecasts suggest a month of planning and dreaming about your goals before you take any action.