February 2016 Leo Horoscope predicts that both professional matters and home affairs are equally important this month for the Lions. Other people’s interest will take precedence over personal ambitions. You are depending on social skills to accomplish your goals in life. This is a period for cooperation and collaboration with others. You cannot be rigid in your approach and your free-will will be dormant for the time being.

In February 2016, the Leo personality will be busy with the execution of large ventures. This will require all your attention and vitality. Health will be important as you require plenty of energy for completion of this venture. 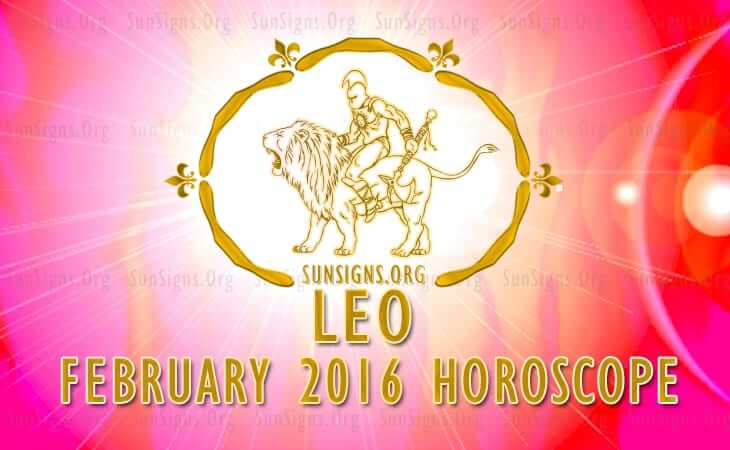 Career environment will be hectic for the Leo zodiac sign in February 2016. You will be faced with stiff competition. It involves plenty of hard work backed by brave and risky actions. Career development will be enormous and will require large amount of travel.

You have the necessary encouragement and assistance from your superiors and family members in your professional activities. You should ensure cordial relationships with co-workers to attain your targets.

The Leo February 2016 monthly forecasts foretell that your monetary position will be extremely healthy during the month. Your actions are backed by sound financial intelligence and strategic planning. Money flow from business or profession can be expected during the first week and from family and social grace after that.

You should be prudent to cut down extravagant spending during the month. Speculative investments in technology and oil and gas will be profitable in February 2016. Money put in government securities will yield good returns for the Lions.

The February 2016 forecasts show that new love will flourish for the Lions but will be restricted by profession and family commitments. Your social contacts will help you in finding a love partner after 19th. Love for the Leo will happen in a surprising fashion.

Your spouse will be instrumental in your financial success. Your spouse, children and family members will seek more time and devotion from you. Pregnancy will have to wait till you are more stronger physically.

The health of the Leos will be affected by professional stress till 20th February. This requires proper care of your exhaustion and fatigue. After that your energy level will rise to great heights. Be sure to relax with music or books to keep your mind calm.

To conclude, the Leo Horoscope for February 2016 forecasts a month of work as well as pleasure.