February 2016 Capricorn Horoscope predicts that you will be spending more time on improving your spiritual strength and concentrating on family and domestic affairs. This is mainly due to the fact that on 19th, the planetary strength will be transferred to the Southern family sector in your astrology chart. Priority on career progress will be low and more emphasis has to be placed on assessing the progress made so far, making changes in the existing plans and working on future goals.

Majority of the planets for the Sea Goats are situated in the independent Eastern half of the horoscope during the month. You have to create your own destiny based on your personal capabilities and follow a rigid path. No need for collaboration or flexibility to change your targets to suit other people.

Till 19th February, religion and mysticism will be dominating the life of Capricorn zodiac sign. This month your craving for personal desires will be enormous and you can spoil yourself by fulfilling your aspirations. 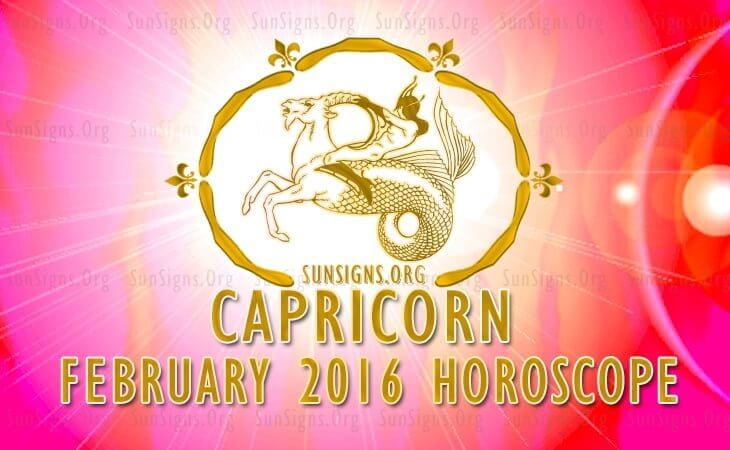 After 19th, Capricorn men or women will be lucky and get a marvelous job if you are searching for a new job.

Business too will be prosperous.

Till 18th February, the Capricorn personality will have to struggle hard to get a normal income and the areas of sales and marketing will be vital to make money. After that, family members will be in the forefront in helping your financial efforts. Transport, realty and communication fields will be profitable for creating wealth.

Expenses towards family and maintenance of residence will involve a considerable amount of money. Investors will be interested in financing your financial ventures. The February 2016 monthly forecasts suggest you clear old loans with the surplus money.

The 2016 February love horoscope for the Capricorn foretell that your personality will be captivating and attractive to the opposite sex during the month. Love will be chasing you and there is no dearth of partnerships. Capricorn sexual and romantic partnerships will be boosted with the help of friends and family members. Dating new people is a good idea.

Personal life will be harmonious and there will be plenty of romance with your spouse. You might even thinking of planning for a pregnancy. Major home repairs and beautification can be taken up during this period. The 2016 zodiac predictions also say that family disputes with elder members will be resolved amicably. Plenty of get-togethers and partying can be expected with family members.

Health will be without blemishes during February 2016 for the Capricorn. New fitness and diet regimes will charm you and you will want to have that perfect body!

To conclude, the Capricorn 2016 February horoscope predicts that this is a month of planning and reevaluating your previous decisions in life.