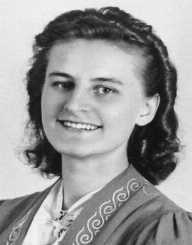 Ilse Koch was born on September 22, 1906.  She was the wife of Karl Otto Koch. Karl was the chief of the Nazi Concentration camps in Majdanek and Buchenwald. She was tried by the United States military for her involvement with the Nazi Regime. She was tried for her cruelty towards the Jews. She was also very crude when it came to handling prisoners as she tortured them and made them do things that were considered inhuman. She was known by the prisoners as ‘The Witch of Buchenwald.’ She was also known by the names ‘Butcher Widow’ and ‘Queen of Buchenwald’ among other names that described her lousy character.

Ilse Koch was born on September 22, 1906, in Dresden, German Empire as Margaret Ilse Kohler. She was peaceful as a child. She attended an accountancy school where she studied accounting. She later became a bookkeeping clerk. In 1932, she became a member of the Nazi Party. In 1934, she met Karl Otto Koch who at that time headed the Sachsenhausen Concentration Camp.

In 1936, Ilse Koch became the guard and secretary at the Sachsenhausen Concentration Camp. In the same, she and her husband, Koch, moved to the concentration camp in Buchenwald. At Buchenwald, she became the supervisor of the camp. At Buchenwald, she murdered selected prisoners who had tattoos on their bodies. The tattooed skin would later be retrieved to aid Erich Wagner who was a prison doctor in his thesis. His thesis was based on tattooing and criminality.

In 1940, Ilse Koch built an indoor sports arena. The money that financed the building of the stadium was looted from the prisoners. In 1943, she was arrested together with her husband by Josias Von Waldeck Pyrmont who was the police leader for Weimar in Buchenwald. They were charged with the murder of witnesses, embezzlement and private fortification. In 1947, Ilse was arraigned in court, and she was accused of participating in a criminal plan for aiding and abetting and participating in the murders at Buchenwald. In the same year, she was sentenced to life captivity. The sentence was warranted by the fact that she violated the laws and customs of war.

In 1948, Ilse Koch had already spent two years in prison when General Lucius Clay reduced her sentence to four years imprisonment due to lack of evidence. General Clay was the provisional military governor of the American Zone, Germany. In 1949, Ilse was arrested again, and her trial lasted seven weeks. In 1951, she was charged with attempted murder, committing grave bodily harm and provocation to murder. She was sentenced to life imprisonment. Her civil rights were also forfeited. In 1952, her appeal was dismissed as well as all her petitions for pardon. Her petitions for pardon were rejected by the Bavarian Ministry of Justice and the International Human Rights Commission.

In 1936, Ilse Koch got married to Karl Otto Koch with whom she had two sons. In 1945, Koch died, and she went to live with her family in Ludwigsburg. She died on September 1, 1967, when she committed suicide at Aichach Women’s Prison. She died at the age of sixty. She was buried at the Aichach Cemetery.