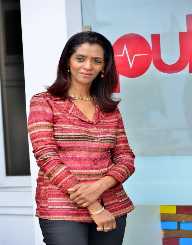 British-Sudanese television and radio journalist Zeinab Badawi was born on the 24 November 1959 in Sudan. Her family moved to the UK when she was three years old, and her father, a journalist, and editors, worked at the BBC.

Zeinab Badawi was a pupil at Hornsey High School for Girls in London before enrolling at St Hilda’s College Oxford where she obtained a BA in politics, philosophy, and economics. She received her MA from the School of Oriental and African Studies at the University of London in 1989.

After graduation, Zeinab Badawi got a job working for Yorkshire TV for three years as a researcher and broadcast journalist (1982-1986). She then joined BBC Manchester before moving back to London to do her MA.

After getting her MA, Zeinab Badawi got a job at Channel 4 News and co-hosted the news for ten years before moving across to the BBC. For five years she worked on political news programmes. She was also a presenter of The World Tonight on Radio 4 and BBC World Service. Then in 2005, she became a presenter of The World on BBC Four, a daily news programme focusing on international news. Today the programme is known as BBC World News Channel. She also works as a presented on BBC’s HARDtalk.

At the Annual Media Awards in 2009, Zeinab Badawi was awarded International TV Personality of the Year by the Association for International Broadcasting. In 2011 she was presented with an Honorary Doctorate of Letters by the School of Oriental and African Studies.

Zeinab Badawi is the founder of Africa Medical Partnership Fund which focuses on providing assistance to local medical professionals on the continent of Africa. She has also worked with the Royal African Society, the National Portrait Gallery and the British Council.