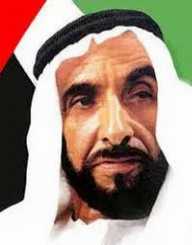 Sheikh Zayed bin Sultan al Nahyan was born on May 6, 1918. There are two versions of his place of birth. Some historians believe that Zayed was born at Qasr al-Hosn in Abu Dhabi. The second opinion shows his place of birth as Al Ain. He was the youngest of the four sons of his parents. His father Sheikh Sultan bin Khalifa Al Nahyan served Abu Dhabi as its ruler since 1922. The tenure was cut short when Zayed’s father was assassinated in 1926. His uncle Saqr bin Zayed Al Nahyan succeeded his father. However, his uncle too was killed in 1928.

Sheikh Shakhbut bin Sultan Al Nahyan, Zayed’s eldest brother, took the reign of Abu Dhabi after the demise of their uncle. As a result of the back to back executions of the dear and near ones, Zayed’s mother Sheikha Salama bint Butti became scared about the safety of her children. She made his sons promise not to resort to violence against each other. The sons never broke the promise.

Zayed grew up in Al Ain, an inland oasis city surrounded by vast stretches of desert. He lived among the local nomadic tribe called Bedouin. Zayed's family brought him up following the Bedouin's traditions and customs. There were no proper schooling facilities around the area. As a result, Zayed did not receive any formal education. He learnt the basic principles of Islam and the traditional skills of the Bedouins. He also took training for acquiring the necessary expertise for survival under severe climatic conditions.

GOVERNOR OF THE EASTERN REGION OF ABU DHABI

Zayed bin Sultan al Nahyan had the advantage of being a member of the first family of Abu Dhabi. Hence, he became the Governor of the eastern region of Abu Dhabi in 1946. He made Muwaiji fort of Al Ain as his base. After that, he assisted the petroleum exploration contingent of Petroleum Development in their exploration efforts. The area under his administration was impoverished. It also lacked essential amenities until that time. It was prone to an outbreak of diseases and epidemics too. However, as a result of his sustained efforts, the prevailing conditions in the area improved in no small extent.

ASCENSION TO THE THRONE AFTER REPLACING THE ELDEST BROTHER

Discontent among the family members against the rule of Shakhbut, the eldest brother of Zayed was brewing at a fast pace. It became more prominent after oil was found in the area in 1958, and its exploration began in 1962. The family members of Sheikh Shakhbut removed him in a bloodless coup on August 6, 1966, inside their palatial residence. After the removal of Shakhbut, Zayed bin Sultan al Nahyan's family members unanimously elected him as the successor of the former. After the British also supported his candidature, he became the Emir (official ruler) of Abu Dhabi. Zayed employed a Japanese architect to design and plan the city of Abu Dhabi during the late 1960s.

The United Arab Emirates came into existence on December 2, 1971. It was initially a federation of six emirates, Abu Dhabi, Ajman, Dubai, Fujairah, Sharjah, and Umm Al Quwain. The incorporation of the seventh emirate Ras al Khaimah occurred on February 10, 1972. Zayed bin Sultan al Nahyan acted as the prime initiator and the principal guiding force of the unification movement. The Arabians fondly remember him as the father of the nation. The world also regards him as the founding father of the UAE.

Zayed bin Sultan Al Nahyan became the first President of the supreme council of UAE immediately after its formation. He subsequently won the elections again in 1976, 1981, 1986, and in 1991. The Federal Supreme Council organized the re-election where all the rulers of the seven emirates expressed their opinions.

Zayed bin Sultan Al Nahyan was a popular and charismatic leader of the Arabian Peninsula. In the year 1989, Zayed fell ill and was hospitalized. During that time, the citizens of UAE gave him a personal thank-you letter. It was a mark of their respect for him. Zayed passed away on November 2, 2004, at the age of 86. At that time, he was the reigning President of the UAE. He served the post for 33 years until his death. His eldest son assumed the presidency of the UAE shortly after his demise. Zayed's family entombed his mortal remains in the courtyard of the freshly built Sheikh Zayed Mosque in Abu Dhabi.

Zayed was a liberal-minded ruler. He allowed the sovereignty of the media on the condition of self-censorship and practicing restraint in criticizing the ruler and his immediate family members. When Iraq suffered under UN sanctions due to its invasion of Kuwait in 1990, he was quite vocal in support of the demand for revoking the sanctions.