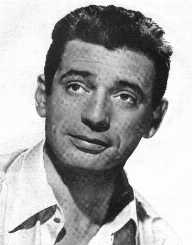 Yves Montand was born on October 13th, in 1921. He is best remembered for being an Italian-French actor.

Ivo Livi alias Yves Montand was born on October 13th, in 1921. His place of birth was in Monsummano, Terme, Italy. He was the son of Giovanni Livi and Giuseppina Simoni. His father worked as a broom manufacturer whereas his mother was a committed Catholic.

In 1923, Montand’s family migrated to France. Their move was influenced by the fascist regime within the country. Montand spent his younger years in Marseille where he helped his sister in her beauty salon.

Yves Montand entered the entertainment industry, first as a singer. In 1944, his acting talent was discovered by Édith Piaf. This opened up the doors for him to cement his name in the entertainment industry. Some of the films that he went on to feature on include Star Without Light – 1946, Paris Is Always Paris – 1951, Heroes and Sinners – 1955, Let's Make Love – 1960, César et Rosalie – 1972 and many more.

Yves Montand married twice in his lifetime. His first marriage was to Simone Signoret in 1951. It could be said that their marriage was successful as the two lovebirds lived together until Signoret passed away in 1985. In 1987, he married Carole Amiel as his second wife. Montand had one child.