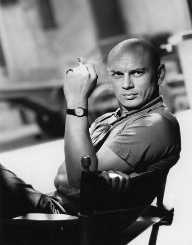 Yul Brynner was famously known for his famous role-playing as King Mongkut of Siam in The King and I which was aired on Broadway back in 1951. In 1956, he went forth to act in the film version of the performances. Up to this time, he had featured in approximately 1246 performances. After appearing in the film version of The King and I, he secured himself an Academy Award for the best actor. Moments later, Brynner was back on stage with 3,379 additional on-stage performances. Other classic films that he was famous for included The Magnificent Seven and Ten Commandments. Brynner died at the age of 65 in 1985.

Yul Brynner was born on July 11th, 1920. His place of birth was in Vladivostok, Russia. His father, Boris Bryner was an engineer while his mother had taken acting and dancing classes. While Brynner was still young, their father left them under the care of their mother. They later moved to China before heading to Paris in 1932 with his mother and his sister. It is in Paris that Brynnersang gypsy songs and playing the guitar in the Parisian nightclubs.

While still in France, Yul Brynner trained as a trapeze acrobat which landed him a job at one of the French circus. He worked here for close to three years before incurring a back injury. As a result of this, he had to find a new career. It is at this point that Brynneropted to try out acting. In 1941, Brynner migrated to the United States. Initially, he acted with a touring company before making his Broadway debut in 1946 with Lute Sang.

After his Broadway appearance in 1946, Yul Brynner spent three years before making his first film appearance in 1949 while playing Port of New York. In 1956, his major achievement came when he featured in The King and Ias King Mongkut of Siam. This was the role that would make him famous throughout his career path. This was a reprise of his role in his performances in the musical The King and I-1947.

The film version of The King and Iearned Brynner an Academy Award. He had been designated as the best actor that year.

After gaining success in the hit film, Brynner was back on stage and did 3,379 extra performances. His last performance in this string was in 1985. As part of his film career, he featured in some films including Anastasia-1956, The Ten Commandments- 1956, The Brothers Karamazov- 1958 and The Magnificent Seven- 1960. His noticeable career earned him Hollywood Walk of Fame recognition.

Yul Brynner tied the knot for four times. His first three marriages were not successful, and he ended up divorcing his wives. His first marriage was to Virginia Gilmore, and together they had one child. His second wife was Doris Kleiner, a model he met while shooting The Magnificent Seven. They also had one child as a couple. During the 70s, he married a French socialite called Jacqueline Thion de la Chaume. Together, they had no children of their own, but they adopted two children. Kathy Lee was his fourth wife. He met Lee while he was involved in The King and I. He spent the last two years of his life with her.

On October 10th, 1985, Yul Brynner succumbed to a lung cancer disease that he had been fighting all along and passed away. He died at the age of 65.