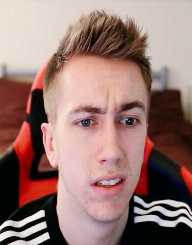 Harry Lewis best known as Wroetshaw (W2S)is a famous British YouTuber and a gamer born on November 24, 1996. You will love him for his gaming channel which is very interesting also serves as a stress reliever. The 20-year-old Wroetshaw makes gaming a fantasy and not a stressful because the games are infused with very interesting commentaries which can even gear you on even you when you losing. To share his gaming online, he created the YouTube channel Wroetshaw in 2012 and shared his gaming and video experience. The channel, which he started with just posting games like FIFA and Call of Duty, he has topped it up with very interesting challenge videos as well as Q&As.

Wroetshaw was born on November 24, 1996, in Guernsey, UK. He has a brother Jose and sister Rosie. He and the rest of the family lived at Guernsey till he was 14 when he moved to London. He currently leaves with other gamer friends, Calfreezy and Callux.

Wroetshaw started gaming at a young age and has built a reputation of one of the best gamers of his generation. His games are sentimental and bring about a lot of sensations. With his FIFA and Call to Duty games are ignited by over the top hilarious commentaries which won’t let you stop playing. To have a perfect place for sharing his gaming techniques, Wroetshaw sought a remedy with YouTube by creating the channelW2S to wow the world with his gaming style. At age 16 he was invited to join the gaming group Ultimate Side which is one of the best gaming groups currently. At the time of his invite, he was the youngest in the group.

His channel W2S is presently the 17th most subscribed Youtube channel in the UK not just because of the gaming techniques but also the interesting prank videos which can have you thinking. He makes gaming like a Childs play taking up challenges that normal gamers wouldn’t attempt

Wroetshaw got himself into the controversy to something some people may as normal, but not to his fans. He posted a video of Ferrari 458 claiming to be his new car, only to turn back in few weeks to negate his previous claim. He was then picked on by fans on social media and criticised him for that fake claims.