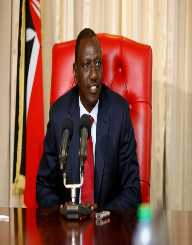 William Ruto was born on December 21, 1966. He is a Kenyan politician. He is the current Deputy President of Kenya a post he has held since 2013. He has been involved in Kenyan politics for a very long time. Before he joined politics, he worked as a teacher in a local school. He entered politics when he started campaigning for former President Daniel Arap Moi under the KANU party. He has a case before the International Criminal Court (ICC) however the case has since been abandoned by the ICC.

William Ruto moved to the Orange Democratic Movement (ODM) where he signed up as a presidential candidate under the ODM ticket, but he lost the nomination. In 2007, he left KANU and resigned from his post as Secretary General. In the same year, there was a lot of heat in Kenya as it was announced that former President Mwai Kibaki had won the elections yet politician and presidential candidate Raila Odinga is the one who had won the elections. This announcement let to the 2007 post-election violence in Kenya.

Later on, President Kibaki and Raila Odinga reached an agreement to form a coalition government where Raila was the Prime Minister of Kenya. In 2008, the coalition cabinet was formed, and William Ruto was appointed as the Minister of Agriculture. In 2010, he was appointed to the Higher Education Ministry. In 2011, he stepped down from being a minister but was still a Member of Parliament. He later joined President Uhuru Kenyatta to from the ‘Jubilee Alliance’ to contest for the presidential elections together. In 2013, Uhuru Kenyatta was voted as the fourth President of Kenya. William Ruto was elected as the Deputy President of Kenya a post he holds to date.

In 1991, William Ruto married Rachael Chebet with whom he has remained married to date. The couple has six children together. He holds a vast number of shares in the insurance company ‘Amaco Insurance.’  He has been accused of several criminal charges including Crimes against Humanity that was filed at the International Criminal Court. He is an alumnus of the University of Nairobi. He was the founder of the United Democratic Movement in Kenya. He taught in several local schools before joining politics.