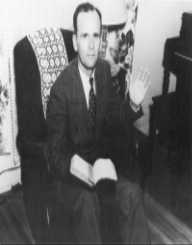 William Marrion Branham was born on April 6, 1909, in Cumberland County, Kentucky. He was the oldest of ten children to his parents Charles and Ella Branham. The family later moved to Jeffersonville, Indiana. Growing up, Branham lived in impoverished circumstances, and his father was an alcoholic. As a child, he claimed to have had supernatural experiences, like prophetic visions.

Branham left home when he was 19 years old and began working on a ranch in Arizona. When his brother died, Branham turned to God and began attending the First Pentecostal Baptist Church in Jeffersonville. He was later ordained as Independent Baptist minister.

In 1933, Branham led his first major tent revival. He constructed a church and named it the Pentecostal Tabernacle, later renaming it the Branham Tabernacle. He was the minister of the church until 1946. When he was baptizing people on June 11, 1933, in Ohio River, he claimed that people there saw a bright light descend over where he was standing, and he heard a voice telling him that he is the forerunner of Jesus second coming.

In 1946, Branham started his meetings as a faith healer. He claimed to have received an angelic visit on May 7, 1946. Branham started out the modern healing revival. He was conducting his healing meetings with the Oneness Pentecostal groups, but in 1947, after meeting Gordon Lindsay, he began to broaden his circle of followers. Lindsay began promoting Branham’s work and founded The Voice of Healing magazine, which at first was meant to promote Branham’s work solely.

In 1947, a lot of controversies began to surround Branham’s name, when reports of his healed people later died. In 1948, the district superintendent with the Pentecostal Assemblies of Canada began to raise concerns and asked for an investigation of Branham’s works. An event occurred in 1950 when Branham was debating with one of his team members F.F. Bosworth when a light appeared over his head. A photograph of this occurrence was taken, and it became one of the most famous relics in the history of revival.

One of the most famous people healed by Branham was U.S. Congressman William Upshaw, who claimed he was healed after meeting with Branham. Upshaw then sent a letter to each member of the Congress describing his experience. In 1955, Branham’s career started to decline, after Jim Jones, the founder of the Peoples Temple used Branham to promote his ministry. The Peoples Temple was best known for the mass suicide in 1978. By 1960s, Branham became a teacher and taught on controversial topics like the end of the world. His teachings led to judgment from many Pentecostals.

On December 18, 1965, Branham was driving from Tucson, Arizona to Jeffersonville together with his family. His car was hit head-on by another car, and Branham died of sustained injuries on Christmas Eve.

Branham was the most revered leader of the healing revival movement and the initiator of the post-WWII healing revival. His peers viewed him as being outside of orthodoxy.