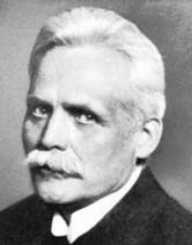 Wilhelm Wien was a German physicist who is best known for his development of Wien’s Displacement Law.

Wilhelm Wien was born on 13 January 1864 in Gaffken Prussia, Gaffken is today located in Russia near the Primorsk. Two years later his family moved Rustenburg which then was also part of Prussia but is today in Poland. His parents were Carl Wien and Caroline Gertz. Wien received home tutelage until the age of eleven. He was taught to speak French by his tutor as well as the standard primary education. He then enrolled at a local school but was expelled for his poor results. He then went to study at Heidelberg. He graduated in 1882 and went to study at the University of Gottingen and the University of Berlin. He received his Ph.D. for his thesis on the diffraction of light in 1886.

Wilhelm Wien then spent three years lecturing at the University of Aachen. While there he developed empirically determined laws for blackbody radiation which was named Wien’s Law. His laws were though rejected by a colleague, Max Planck whose own theory led to the development of quantum theory. This led to amendments to Wien’s Law. In 1890 he was forced to sell his family farm and took up a position working with Hermann von Helmholtz. In 1900 he went to Wurzburg to take up a physic professorship at the local university. He would later be offered the head of physics positions at both the University of Leipzig and the University of Berlin but turned down both positions. In 1913 he visited the United States of America as a guest lecturer at Columbia University.

He accepted the position of professor of physics at the University of Munich. While working at the University of Munich, he also served as the rector of the University and oversaw the expansion of physics department. Wien’s best-known work was on what became known as Wien's Displacement Law. Wien’s Displacement Law explains the relation between the temperature of a Planck Blackbody and the wavelength that manifests a maximum radiated power. It states that wavelengths emitted from the blackbody become shorter as the temperature rises.

Wilhelm Wien also worked on studies of ionized gas and identified a positive particle which was equal in mass to a hydrogen atom. This work paved the way for the study of mass spectrometry. Mass spectrometry is a technique which sorts ions based on mass to charge ratios. As well as science Wien also had a keen interest in history and the arts and often traveled around Europe to indulge his interest in both.

In 1911 Wilhelm Wien was awarded the Nobel Prize in Physics. The prize was awarded for his work on laws governing radiation of heat.

Wilhelm Wien married Luise Mehler in 1898. Wien and Mehler had been long time lovers and met at Aix la Chapelle. Together they had four children together, Gerda, Hildegard, Karl, and Waltraut. Wilhelm Wien died on 30 August 1928 in Munich.