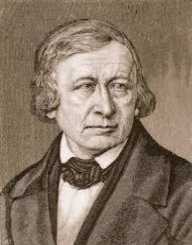 Wilhelm Carl Grimm was famous as the other half and the younger brother of The Brothers Grimm. He and his brother left a legacy in the world of literature by their collection of stories entitled Children’s Household Tales or known in their local German language as Kinder-und Hausmärchen. Many of their stories were later adapted into animation films by renowned animation studio Disney.

Wilhelm Grimm was responsible for the editorial aspect of their work. In the course of his life, he co-authored about two dozen books with his brother.

When he was 39, he married Henriette Dorothea Wild a little short before his fortieth birthday. The couple produced four children together.  He died at the age of 73 in Berlin, Germany on December 16, 1859.

The Lawyer’s Son’s Childhood and Education

Born on February 24, 1786, as Wilhelm Carl Grimm on Hanau, Germany, he followed older brother Jacob in a bunch of six children. His parents were Philipp and Dorothea Grimm of which his father worked as a lawyer. However, due to his father’s untimely passing, he was raised by his aunt instead.

Following the footsteps of his father, Wilhelm Grimm began attending the University of Marburg’s Law School alongside his older brother Jacob. However, Wilhelm struggled with health issues which led him to postpone law practice until 1814. He found employment in Kassel, Germany as a secretary in the royal library.


The Birth of The Grimms’ Fairy Tales

Jacob followed Wilhelm in Kassel in 1816 where the height of German Romanticism was at its peak. The brothers then grew interested in the subject and studied the manner of storytelling in their region, as a way of preserving the oral storytelling methods that were slowly being overrun by the introduction of technology.

Their dedication towards the craft led to the publication of the first edition of Kinder-und Hausmärchen which was released in 1812. These stories were a consolidation of stories told by friends and family, as well as the village story-telling and also contained fairy tales which were previously printed beforehand.

Their work was well-received by the public however they decided to appeal to younger audiences hence the work being published a second time in 1815.

This time, it was known as The Grimms’ Fairy Tales where famous children’s stories were introduced to the book such as Snow White, Cinderella, and Little Red Riding Hood to name a few. Wilhelm served as the editor for this book, seeing to it that some of the endings were altered and revised the general language for easier understanding.

Life After The Grimms’ Fairy Tales

Fifteen years after the second publication of Kinder-und Hausmärchen, Wilhelm Grimm took the position of an assistant librarian at the University of Göttingen in 1830. The brothers resigned mid-year from being banished by the King of Hanover after the two protested against the king’s changes in the constitution.

A decade later, the brothers became esteemed members of the Royal Academy of Science in 1840, finally taking residence in Berlin, Germany.

As members of the Royal Academy, they were tasked to prepare a comprehensive dictionary of the German language, as well as serving as lecturers at the university. The complete dictionary reached its completion years after Wilhelm’s death in 1859.