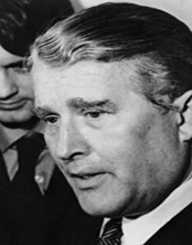 Wernher Von Braun was born 23rd March 1912, to Magnus and Emmy von Braun. He was born in the Wyrzysk. He had two brothers, one older, and one younger.

Braun was born into nobility, with the title “Freiherr”, which is the equivalent of Baron. In 1919 the privileges of noble families were stopped by the German government, but the noble titles were still allowed to be used.

His father served as Minister of Agriculture for the federal government, and his mother descended from European royalty.

The family moved to Berlin in 1915. Braun's father worked at the Ministry of the Interior. Braun had been given a telescope by his mother, and he developed a keen interest in astronomy.

As a youngster, he was also an accomplished musician, being able to play the piano and the cello. He took lessons for awhile in composing, but he didn’t pursue it long term.

Wernher Von Braun moved to a boarding school in 1925. He didn’t do particularly well, and in 1928 he moved to a different boarding school. At his second school, he decided to apply himself to his studies, particularly physics and mathematics so that he could pursue rocket engineering which was his major interest.

In 1930 he enrolled at the Technische Hochschule Berlin (now known as the Technical University of Berlin), from where he graduated in 1932 with a Diploma in Mechanical Engineering.

Braun was keen to continue his studies, and he enrolled for post-graduate studies at the Friedrich-Wilhelm University of Berlin. He graduated with his Doctorate in Physics in 1934.

Although weapons were banned in Germany, rockets were not on the list. Due to this, Wernher Von Braun was able to pursue a career as a rocket scientist.

He joined the Nazi party in 1937 and followed this by joining the SS in 1940, with an entrance rank of Untersturmfuhrer. Braun had been invited by Himmler to join the SS, and after taking advice from his military superior, realized that he needed to join if he wanted to continue his work in rocket science.

Although Braun downplayed his involvement within the SS to the United States government, he continued to regularly advance through the ranks until his last rank was that of SS-Sturmbannfuhrer (Major).

The National Socialist German Workers Party, also known as the Nazi Party, came into power in 1933. Rocket science became an area of national interest. Braun was given a research grant to allow him to continue with his experiments.

As time passed and work continued, Braun became the Technical Director at the military facility in Peenemunde where the rockets were being made. They developed liquid-fuel rocket engines, and the long-range A-4 ballistic missile, as well as the Wasserfall supersonic anti-aircraft missile.

In 1943, Braun was made a Professor personally by Adolf Hitler. When the A-4 rockets were launched at England in 1944, Braun expressed his disappointment that the rockets were being used to kill people rather than for space travel which had been his intended desire for them.

Jewish prisoners from the concentration camps were used as slave labor to build the rockets, and many died in the process under intolerable conditions. Braun denied seeing any beatings or people dying, although this conflicted with reports from prisoners.

The power-hungry Himmler had Braun detained for two weeks in March 1944 on false charges of Wernher Von Braun being a communist sympathizer. Braun's release was arranged by the Abwehr in Berlin, and Hitler was persuaded to allow von Braun back into the V-2 program to continue with his work.

In 1945, the Soviet Army was advancing towards Peenemunde. Wernher Von Braun spoke to his planning staff and as they didn’t want to side with the Soviets, they decided they would surrender to the Americans.

As the war continued, Wernher Von Braun and his team were moved to a more secure area under German guard. Braun persuaded SS Major Kummer to allow the team to move in smaller groups to several villages so they wouldn’t be an easy target for the U.S. bombers.

His plan saved many of his engineers when many of them along with von Braun managed to get themselves to Austria, where von Braun was able to surrender to the U.S.

The U.S. military realized the importance of von Braun.

Career In The U.S. Army

Wernher Von Braun and his team were moved to the United States in June 1945. They continued to work on their rocket research, but their plans were continually dismissed. They also had to train American military, industrial, and university personnel.

In 1950 Braun and his team were moved to Huntsville in Alabama. He would remain there for the next 20 years.

From 1952 to 1956, Braun led the Army’s rocket development team. The Redstone rocket was developed, followed by the Jupiter-C, which launched the first satellite from the Western world into space.

At long last,  Braun could concentrate on using his rocket research for space travel rather than war.

Wernher Von Braun developed his thoughts on space travel and a space station and even worked with Walt Disney and the Disney studios for three television movies about space exploration.

In 1957, the American government decided Wernher Von Braun was the man to get them into space. The government wanted an orbital launch vehicle. Braun had originally proposed the idea in 1954 but it had been shut down at the time.

In 1958, NASA was established by law. In 1960 the Marshall Space Flight Center was opened at Redstone Arsenal in Huntsville. Braun led the Army Ballistic Missile Agency (ABMA) development team, which was moved to NASA to continue their work.  Braun was the first Director, serving from 1960 to 1970.

Wernher Von Braun and his team developed the Saturn rockets and from there, the Apollo program was developed. Von Braun was a major contributor to the development of the U.S. Space and Rocket Center.

In 1970  Braun relocated to Washington, DC with his family. He was commissioned as the Deputy Associate Administrator for Planning at NASA Headquarters. Braun retired from NASA in 1972. He was frustrated as people’s interest in space travel declined after the moon had been reached.

In 1972, Wernher Von Braun took up the position of Vice President for Engineering and Development at Fairchild Industries, an aerospace company.

The following year he was diagnosed with cancer. He continued working until 1976 when his failing health forced his retirement.

Braun had several published works, including, technical volumes, speeches, and works in conjunction with others.

Among his many awards and honors were the following:

1959:   Commander’s Cross of the Order of Merit of the Federal Republic of Germany

Wernher Von Braun married Maria Luise von Quistorp in Germany on 1st March 1947. He returned to the United States with his bride and his parents, later that same month. The couple had three children, two daughters, and a son.