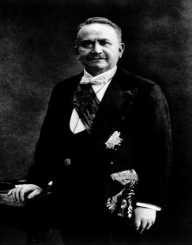 As a young adult, Vincent Auriol attended the College de Revel. Here, he studied law. He earned his degree in law in 1904.

After graduating with his law degree, Vincent Auriol began working as a lawyer. This took up the bulk of his time. However, from the mid-1900’s to the mid-1910’s, he also took on various other pursuits. Around the mid-1900’s, he joined the socialist party. He founded the Le Midi Socialist Newspaper in 1908, which was a socialist newspaper. Shortly after founding the newspaper he became a member of the Association of Journalists.

One of the defining moments of Auriol’s life was when he entered politics in 1914. Vincent Auriol would spend most of the rest of his life in this career track. In this same year, he earned a chair in the Chamber of Deputies. He was great at the job and stayed in it until 1942. However, as he worked here, in the beginning, he was a member of the SFIO party, a type of socialist party, was dissolved. A new and similar party, SFIC, was created, but Auriol did not join it.

In 1928, Vincent Auriol was still the mayor and a member of the Chamber of Deputies. Still, he was looking for advancement. He joined the Departmental Councils of Haute-Garonne in this year. He stayed on this council until 1947.

In 1936, Vincent Auriol was working for the Chamber of Deputies, the Departmental Councils of Haute-Garonne, and as the Mayor of Toulouse. Still, Vincent Auriol was looking for more work. In this year, he began working as the Minister of Finance. He kept this position only until 1937. He was not particularly good at this job, as while he was working here, the value of the French franc went down.

In 1938, he was back down to three jobs. He focused mainly on his job in the Department of Deputies. Things were becoming heated in France, as World War II was breaking out. One negative member in French politics was the soldier turned politician Philippe Petain. Vincent Auriol was more or less doing little to nothing to stop the Nazi invasion and takeover of France. (Petian would later be tried for treason and sent to prison for life). Vincent Auriol did not agree with Petain and voted against granting him leadership of France. Auriol was later put under house arrest for this. It was not until 1942 that he was released.

In 1943, France was still in the middle of World War II. During the rest of the war, Vincent Auriol took on several government positions. He was a member of the Free French Consultative Assembly, the Financial Conference, and he also worked as a diplomat for France.

After the war, he focused on his career as the Deputy for Haute-Garonne until 1947. After his time in his job was up, he ran to become a member of the National Assembly and won. He then became the President of the Fourth French Republic.

Since Vincent Auriol was a post-war president, he had a lot of work to do. He struggled to improve France’s economy after the war. He reached out to other countries for help. The Communist party in France also caused some economic problems, as many members of the party were on strike. The party was later dissolved.

Also while President, France was involved in more war. The Indochina War began in 1945, two years before Auriol took office. However, the war did not end until 1954 (with France losing the war), so Vincent Auriol had to be heavily involved in the conflict. In 1952, France entered into another war, this time with Madagascar. Vincent Auriol dealt with these wars, as well as many post-war problems until his term as president ended in 1954.

In 1958, Vincent Auriol joined the Constitutional Council of France. He stayed here for two years before he retired. It was also in 1960 that he retired from politics altogether.

Vincent Auriol married Michelle Aucouturier in 1912. The couple had one child together, Paul. The couple remained married until Auriol’s death.