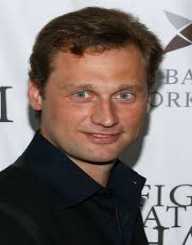 Viktor Vasyliovych  Petrenko was born in Odessa, Ukraine on 27th June 1969. As a child, the doctors advised his parents to put Petrenko in a sporting activity to strengthen his body since he was a sickly child.

At the age of six, his parents took him to a local ice rink. Galina Zmievskaya, a skating coach, noticed his skating talent at the age of nine. She enrolled him at Spartak in Odessa, a skating school.

Under the guidance of coach Galina Zmievskaya, Viktor Petrenko learned the triple jump. By the age of 11, he had developed into an all-rounded skater. In 1984, World Junior Championship Petrenko won gold. His performance during the competition made him the most promising star of the sport.

Four years later, Viktor Petrenko participated in the 1988 Olympic Games. Despite a star starred line up, he made away with a bronze medal.

The pick of his career came in 1990 and 1991. Viktor Petrenko occasionally thrilled the audience with his elegant and athletic performance. During that year he won a gold medal in the European Championships.

After a rule that allowed pros to return to amateur competition passed, he returned to the European championship in 1994. He, however, finished fourth in the tournament.

In an act that earned a lot of praise, Viktor Petrenko fostered Oksana Baiul. He convinced his coach Galina Zmievskaya to train Oksana Baiul, a 14-year-old orphan. Petrenko offered to pay for the 14-year-old facilitation fee.

Under his guidance, Oksana Baiul went on to win World Figure Skating Championship in 1993 before earning a gold medal in the 1994 Winter Olympics.

Viktor Petrenko organized a skating competition for kids on March 2001. He invited his celebrity friends to perform in the event. The event's purpose was to raise awareness among the nuclear disaster facing children.

The event managed to raise $108,000 which in the opening of The Viktor Petrenko Neonatal Intensive Care Unit.

Viktor Petrenko moved his family to the US IN 2005, where they settled in New Jersey. For several years Petrenko worked as an International Skating Union (ISU) technical specialist. He took over the helm of the Ukrainian Figure Skating Federation in 2008.

Viktor Petrenko found himself on the wrong side of the law in 2004 after he went in for driving under the influence of alcohol. His car crashed into a utility pole. He after that refused to take a breathalyzer test. After going through an alcohol education program, he cleared his name.