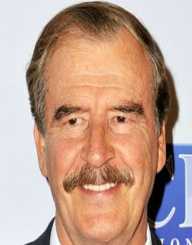 Vicente Fox Quesada was born 2nd July 1942, to Jose Luis Fox Pont and Mercedes Quesada Etxaide. He was born in Mexico City, Mexico, and was one of nine children.

Fox grew up in Guanajuato. He learned English at the high school, and he moved to Mexico City to study at Universidad Iberoamericana. He graduated in 1964 with a degree in business administration.

Vicente Fox then studied at Harvard Business School in the U.S. and graduated in 1974 with a diploma in management skills.

Vicente Fox joined the Coca-Cola Company in 1964 as a route supervisor, driving a delivery truck. Over the ensuing years, he worked his way up the corporate ladder, and nine years later he was the President and Chief Executive of Coca-Cola Mexico. In 1979 he was offered the role of managing the entire company’s holdings across Latin America, but he declined the offer and resigned from the company later that year.

Fox began involving himself in the local community of Guanajuato. He established an orphanage and became the president of the Patronato Loyola, a sponsor of his old university and Lux Institute.

In 1988, Vicente Fox joined the Partido Accion Nacional (National Action Party). He was elected to the federal Chamber of Deputies shortly after as a representative for the Third Federal District in Leon, Guanajuato.

In 1991, Fox ran to become Governor of Guanajuato. Although he lost the election, he ran again four years later and won. He was one of the first Governors in Mexico to be transparent with public monies.

Fox was a proponent for the small person, enabling loans for people to open businesses, and to ensure they had enough to buy a car and a television. Guanajuato became the fifth largest economy in Mexico under Fox’s rule.

In 1997, Vicente Fox announced he would be running a campaign to become President of Mexico. He represented the Alliance for Change, which was a coalition of the National Action Party and the Green Ecological Party of Mexico.

In July 2000, Vicente Fox won the presidential campaign and became the 55th President of Mexico on 1st December 2000.

Although Fox dislodged one of Mexico’s political parties that had been in power for a long time, he will be remembered for his lack of action once he was in office. He would not make tough decisions, had any success in fighting crime, and had minimal economic growth, with many citizens migrating to the U.S.

He left office in December 2006 and joined the public speaking circuit. Despite criticism from his peers, Fox had an approval rating of 70% when he left office and is going to use that to campaign with future presidential candidates, something that has rarely been done by past Mexican leaders.

Vicente Fox has also been criticized for doing public speaking, but once again, he has spoken out against those that have criticized saying that Mexico is a democracy and he does not live in the authoritarian past as those that criticize him do.

Fox does not shy away from hot topics, and he is an active advocate for the legalization of all drugs, saying it is a personal choice, and people should have the right to take drugs if they want to.

In 2007, Vicente Fox published his autobiography, Revolution of Hope: The Life, Faith, and Dreams of a Mexican President.

Vicente Fox also announced in 2007, the building of a center of studies, library, and museum, which would become Mexico’s first presidential library. The building was to be privately funded and would be styled after the Bill Clinton Library, where personal papers, records, and gifts of the President would be on public display. The building was completed in 2015.

Among his awards and honors, Vicente Fox has the following:

Spain – Collar of the Order of Isabella the Catholic

Sweden – Knight of the Royal Order of the Seraphim

Vicente Fox married Lilian de la Concha in 1969. He met her at Coca-Cola, where she was working as a receptionist. The couple had four children, but they divorced in 1990.

Fox’s second marriage was in 2001 while he was President. He married Marta Maria Sahagun Jimenez who was his spokesperson at the time.