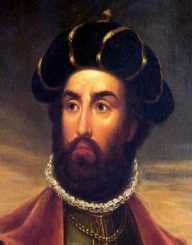 Vasco da Gama was a Portuguese high born explore. He was born into a noble family circa 1460 in Sine, Portugal. When Vasco da Gama was age, the king of Portugal gave him a commission to find a trading route to India through the sea. This was around the year 1460. In his duty, he made several stops along the way of discovering other new ports like Mombasa.

Moreover, his discovery was one of importance in the history of navigating the seas. After, tracing the route to India, he made two more trips there. Sometime later, the King made him the Viceroy of India in the year 1524.

Vasco da Gama was of noble birth in Sines, Portugal in the year 1460. There are little facts that people of his childhood. However, the one clear data is that Vasco da Gama was the son of Estevao da Gama. Also, he was the 3rd child of the family. The father was a commander of a fortress in Sines. When the young noble Vasco da Gama was of age, he went ahead to join the naval force of Portugal.

In the navy, Vasco da Gama got to learn the valuable tool of any good sailor, navigation. Navigation became one of his strongest skills in the navy. Therefore, some of his colleagues knew him as one of the fiercest navigators. This made his reputation soar in the kingdom. So, the King, John II of Portugal gave him the mission to seize French ships in Lisbon. This was an act of revenge against the French for causing an interruption on the Portuguese ships.

Vasco da Gama went on to finish the Kings order with exemplary results. In the year 1495, the new King Manuel took the throne. So, he made sure the country would be on a mission to find a route to India. Since Vasco da Gama had given his distinguished reputation to the service of the kingdom, he was a better choice to carry out the mission. So, Vasco da Gama got the opportunity to prove himself again.

Some people believe that Vasco da Gama was not ready for the exploration duties to India. This was after he had put a lot of commitment to working with the crown. So, in the year 1497, Vasco da Gama took to sea with a team of four vessels. They then set sail on the 8th of July 1497. It was a natural beginning for Vasco da Gama; he only had to point his ship south using the strong African winds. He went against the choice of Christopher Columbus who had sailed East in his voyages.

After a few months in the sea, Vasco da Gama and his crew came upon the Cape of Good Hope. Later he turned his attention to sailing towards East Africa. It was in this time that Vasco da Gama realized that truly both oceans due to mix. Most of the crewmen had become sick and scurvy by the time they reached Mozambique. So, they were forced to anchor down there. They stayed along the coast of East Africa for almost a month. The ruling sultan was not happy about the simple gifts that Vasco da Gama and his crew had offered them. So, in turn, he sent them away.

So, the crew sailed to Kenya. After that, he and his men set out for a 23-day sail across the Indian Ocean to India. They got to Calicut India on the 20th of May 1497. Upon reaching the region, they had a lot of language barrier problems. This was because of the presumption that member of the area were Christians. However, the members of the Hindu religion were welcoming to their visit. At the time they managed to get to India many of the men had died from scurvy and other illness. Also, not all the people in the region did like their presence especially the Muslims. So, they had a lot of difficulty in trading with most of the local people.

Moreover, many of the locals were reluctant about the notion of giving their trading grounds to Christians. At some point, they were forced to make barter trade at the waterfront. At the end they just wanted enough supplies to give them round a trip home. So, in the year 1498, Vasco da Gama and his crew set sail ones more. This time for the journey back to Portugal. Vasco da Gama had made a bad judgment call on the start of the voyage giving that it was a monsoon season. Due to the number of deaths in the fleet Vasco da Gama set one of his ships ablaze to economize. Vasco da Gama and his men got back to Portugal almost one year later after leaving India. This was on the 10th of July, 1500.

After the first voyage to India and back home, Vasco da Gama made another trip to India again. In which he went back home again. However, the new king asked of him to be the new Viceroy of India. He accepted and went back. So, in 1524 hit set sails and went back to India. In the same year, the grand explorer met his death in Cochin. The body was taken back to Portugal for burial. He was buried in the year 1538 in Portugal his home country.