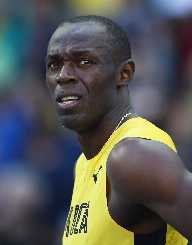 An Olympic Legend who is always referred to the “Fastest Man Alive.” This title was given to him as a result of his world record break. He won 9 gold medals as a reigning champion at 2008, 12, and 16 Olympic Summer Games. Usain Bolt could be said to be the fastest man on earth as he became the first man to win both 100m and 200m races in record times in the history of Olympic. He also broke his world record time in 2016 and made history as the first man to set three world records in Olympic Games. In his career, he won 9 Olympic Gold medals of which he won three gold medals each Olympic games.

Usain Bolt was born in Jamaica on the 21st day of August 1986 to Jennifer and Wellesley Bolt. He was one of the three children given birth to by his parents. His parents are not too rich. In fact, they manage a shop where grocery was sold for them to put food on the table. He was enrolled in a primary school where he was known as a very good sprinter during his time. His known to have always won each contest with more than 10 meters sometimes. Later on, Usain Bolt moved to William Knibb Memorial High School. There, he chose to play Crickets.

However, the coach discovered him as a better athlete and not a cricketer. Thus, he advised him to choose athletics. He listened to the coach and started running. The participated in the 200 meters racing event in the school and finished in just 22.04 seconds. He thus won his first high school championship by taking the silver in the race.

At the age of 15, his first shot at success was taken at the World Junior Championship, 2002 Jamaica. He won the 200 meters dash and became the youngest world junior gold medallist ever. This feet impressed a lot of people in the world of athletics. He received a lot of accolades and named the Rising Star for the year receiving an award from the International Association of Athletics Foundation. He was nicknamed Lightning Bolt.

Usain Bolt was injured in the hamstring during the 2004 Athen Olympics. He got eliminated in the first round. However, in 2005 and 2006. He was eliminated after reaching the World Top as a result of this same injury. He was prevented from participating in a full complete professional season by the injury. However, in 2007, he broke a national 200-meter record. He also won two silver medals at the World Championship. His morale was boosted, and he took a more serious stance to succeed through a lot of training in his career.

The announcement made by Usain Bolt to participate in the 100-meter and 200-meter 2008 Olympic dashes made many people thought that he was too inexperienced for that. However, he broke the world record with his 9.69-second completion of the 100-meter race. He, however, won three gold medals and broke the world records in Beijing. In 2012, at the London Olympic games. Usain Bolt won his fourth Olympic gold medal by shattering his record with 9.63 seconds win. He also won other gold medals in other areas. He became the first man to win three gold medals in both 100 and 200-meter dash back to back. He later became the first man to win three golds in three consecutive Olympic games in 2016 Summer Olympic Games. He remains undefeated in his race and always proves the being the fastest being on earth as nicknamed by the media.

Usain Bolt spent most of his life playing Cricket and Football with his brother. He is known for his humanitarianism. In 2008, he was known to have contributed a whopping sum of $50, 000 to the victims of Siachen earthquake. He is known to be a football freak as well as an ardent supporter of Manchester United. Usain Bolt is also known to be a fan of Ruud Van Nistelrooy. He is known as the fastest being on earth, and as at the time of writing this, he is undefeated.