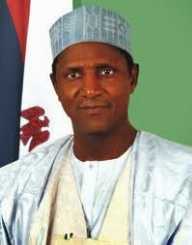 Yar’Adua married two women in the duration of his life. His first marriage was in 1975 to a woman named Turai who is a native of Katsina. The couple had 7 children together which consists of 2 sons and 5 daughters. His second marriage was in 1992 to Hauwa Umar Radda who bore him two children. Yar’Adua’s marriage to Radda lasted for a period of 5 years, ending in 1997.

Born on August 16, 1951, in the state of Katsina, Nigeria, he came from a noble lineage of Fulani family. His father served as the First Republic’s Minister of Lagos. Yar’Adua also inherited from his father the title of Matawalle, or the guardian of the royal treasury of the Katsina Emirate.

Due to his lineage, he had the opportunity to attain a quality education. He started his education in 1958 by attending the Raffuka Primary School then attended Dutsinma Boarding Primary School 4 years later in 1962. In 1965, he enrolled at the Government College located in Keffi until 1969. From 1972 until 1975, he attended Ahmadu Bello University where he attained a degree in Education and Chemistry. He returned 3 years later in 1978 to get his masters degree in Analytical Chemistry.

Upon graduating from college, he found his first employment in 1975 in Lagos at Holy Child College. He then served as a lecturer in Kaduna State’s College of Arts, Science and Technology in Zaria from 1976 to 1979.

Aside from being active in the field of education, he also ventured into the business industry. He served as the General Manager of Sambo Farms Ltd from 1983 until 1989 while simultaneously working as a Board Member of Katsina State Farmers’ Supply Company from 1984 until 1985.

He made his entry to the world of politics at the Second Republic. He became a member of the People’s Redemption Party as a leftist and also served as one of the founding members of the political association called Peoples Front.

His first attempt at running for the Governorship election in 1991 led to his defeat against Saidu Barda. He ran again for the second time in 1999 and won the position and was even reelected in 2003. Yar’Adua also made history as the first governor in Nigeria to declare his assets.

In December 2006, he was selected as the Presidential nominee for the April 2007 elections and garnered a landslide of 3,024 votes while his closest competitor, Rochas Okorocha only amassed 372 votes. His popularity was greatly credited to incumbent President Olusegun Obasanjo’s support of him.

Yar’Adua won the presidential election of 2007 garnering 70% of the votes as released by the press which was one of the most controversial elections of Nigeria. He was sworn to the office on May 29, 2007, but shortly after getting caught in a controversy regarding his health. The same year he was sworn, there were speculations of a kidney condition that he has been struggling with.

In 2009, news of his worsening health condition once again made rounds. It has been said that Yar’Adua was receiving treatment for pericarditis in November 2009 in Saudia Arabia. He returned to Abuja in February 2010 with his health condition still unclear but there have been talks that he’s functioning on life support by then. A few months later, he finally succumbed to his illness and died on May 5, 2010, in Aso Rock Presidential Villa. His family held an Islamic burial and he was buried a day later in his hometown of Katsina.