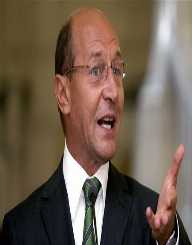 Romanian politician Traian Basescu was born on the 4 November 1951 in Murfatlar, Romania to Elena and Dumitru Basescu.

Traian Basescu was a pupil at Costache Negruzzi High School in Iasi, and later when the family moved to Bacau, he enrolled at the Lucretiu Patrascanu High School. He then studied at the Marine Institute of Mircea cel Batran and graduated in 1967.

During the 1970s and 1980s, Traian Basescu served in the merchant navy, rising to the rank of commander. In the late 1980s, he was posted to NAVROM Antwerp office. In 1989 he was made the director of the State Inspectorate for the Civil Navigation in Romania.

After the Romanian Revolution in the early 1990s, Traian Basescu became head of the Maritime Department of the National Salvation Front. He was the Minister of Transportation between 1991 and 1992. And in 1992 he was elected to parliament as the member for Vaslui.

Traian Basescu became mayor of Bucharest in July 2000-2004. In 2003 rumors started to circulate that he had received bribes for selling off state-owned naval vessels during the Communist years. No charges were laid or proven, but the rumors damaged his reputation.

In 2004 Traian Basescu ran for President of Romance and beat Adrian Nastase. Three years later, political opponents gained control of the country and suspended him, but a nationwide referendum meant that he was reinstalled as president of the country. In 2004, Romania was accepted as a member of NATO and in 2007, as included in the European Union.

In 2009 Traian Basescu again won office, beating Mircea Geoana. The pattern repeated itself when in 2012, he was thrown out as president by political opponents and a referendum reinstalled him to the office of the presidency.

After two terms as president, Traian Basescu had to vacate the office of the presidency, and Johannis Klaus succeeded him. Basescu continues to be involved in politics and is a member of the PMP party.

Traian Basescu married his wife Maria in 1975, and they have two daughters, Elena and Ioana.