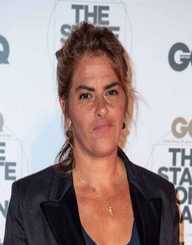 In a world where specialization is the order of the day, the British artist Tracey Emin chose a wide range of mediums including sculpting, drawing, painting, cinema, photography, embroidery, installation art, etc. to carve out a niche for herself as one of the most provocative and subversive artists in recent times.

Her uninhibited and boisterous attitude coupled with some brassy media appearances gained her considerable notoriety, with the press often citing her as ‘the bad girl’ of the British art scene.

One of the most famous representatives of the Young British Artists (YBA), Emin’s work is self-reflexive and confessional often alluding to her troubled childhood and traumatic personal experiences which range from rape and molestations to imprudent abortions and alcohol abuse.

Tracey Emin's troubled childhood has shaped her works gravely. When she was 13, she was raped, and several other incidents of child abuse and molestations were rumored to have occurred. Emin’s academic life is also quite colorful. She studied fashion at Medway College of Design. Two years later she enrolled herself into University for the Creative Arts, where she studied painting.

She received her MA in painting from Royal College of Art in London, and she also pursued philosophy for a brief period at Birkbeck, University of London. Post her graduation, Tracey had two abortions which left her devastated.

Tracey Emin vented out her frustration on her artworks by ruining all she produced during her stint in London. Later Tracey revealed that she was tormented with a guilty conscience while she was becoming successful. She described her abortions as kind of a Faust-like deal, alluding to her success for sacrificing her children.


Claim to fame and major works

In 1993, Tracey Emin showed traits of her singularity in her first solo show in London where among other personal paintings and photographs, she displayed the pack of cigarettes her uncle was holding at the time of his death in a brutal accident.

In 1995, Emin created one of her most famous pieces, ‘Everyone I Have Ever Slept With 1963–1995’. The work was a result of Carl Freedman, her then boyfriend and curator of the show Minky Manky, (where the tent was first showcased) pushing her into creating ‘some big work,’ which instigated Tracey into shutting herself with the needlework for six months in her flat in Waterloo.

The appliquéd blue tent had 102 names of people she has slept with, including non-sexual sleeping partners. The names included the two unborn children too.

The tent was owned by Charles Saatchi, who later bought Emin’s other works also, but it was destroyed by fire in 2004. The work was derided by many even after its destruction, while some praised it as an explicit expression of human intimacy.

Tracey Emin gained widespread media attention in 1997 at a Channel 4 programme, where she turned up drunk and swore on live TV.

She was nominated for the Turner Prize in 1999 for her creation ‘My Bed.’ She also showcased six watercolor paintings in that exhibition. It didn’t win the award but has stayed in everyone’s memories for its shock element because of the materials used in creating the art installation.

The messy bed which was a result of Tracey’s own messed up private life attracted a lot of public attention. The controversial work was ridiculed as repugnant and unsavory, mainly because of items like used condoms and underwear with menstrual blood on them lying on the floor and bed sheets having distinctive yellow stains.

The unclean, disheveled bed still found an owner in Saatchi who shelled out £150,000 for it. In 2014, at an auction, the artwork generated more than 2.5 million euros.

Tracey Emin showcased her neon arts and sculptures at another solo exhibition at Modern Art Oxford in 2002-03. In 2007, she became only the second woman to represent the UK in a solo show at Venice Biennale.

Tracey once again used different mediums to express herself including her work with neon lights. A promotional monoprint ‘Fat Minge’ gained a lot of attention. Emin’s monoprints are well known among his followers. One of her more famous works is the series about her horrifying experiences in Margate, where she grew up.

Tracey Emin has done many solo and group exhibitions in the Netherlands, Germany, Japan, Australia, etc. In 2001, she won the Jury Prize Cairo Biennale Award in Cairo. In 2007, Emin was honored with the distinction of a Royal Academician by London's Royal Academy of Arts, who appointed her in 2011 as a Professor of Drawing.

She was also awarded an Honorary Doctorate from the Royal College of Art, a Doctor of Letters from the University of Kent and a Doctor of Philosophy from London Metropolitan University. In February 2013, Woman's Hour on BBC Radio 4 named Emin as one of the 100 most powerful women in the UK.

In 2008, Tracey had her first retrospective ‘20 Years’ at the Scottish National Gallery of Modern Art, Edinburgh with subsequent tours to CAC, Malaga (2008) and Kunst Museum Bern (2009).

Tracey Emin has actively participated and raised over a million pounds in many charities such as National Society for the Prevention of Cruelty to Children, The Independent’s ‘Christmas Appeal’ and Terrence Higgins Trust. She often donates her artworks to auctions.

In 2008, she set up ‘Tracey Emin Library’ at a school in Uganda, highlighting the importance of imparting education in rural and backward areas. In (Auction) RED, Tracey donated a red heart-shaped neon artwork which she named ‘I Promise to Love You‘.

The auction took place on Valentine's Day with the motive of helping out HIV affected children and women in Africa. It sold for a whopping $220,000.

While discussing the tragedy of her abortions, Tracey Emin mentioned that she religiously follows her art only. She did indicate that she is not Catholic and instead believes in the soul.

Tracey Emin has described expressionist painters like Edvard Munch and Egon Schiele as her influences. Her work has been referred to as ‘feminist work,’ although she has dissented to such claims.

Tracey has had a tumultuous love life. She has claimed to have had many sexual partners. While studying at Medway College of Design, she met Billy Childish. The couple dated till 1987. Billy’s press Hangman Books published some of Tracey’s poetry works. Later in an interview, Tracey described Billy as the most influential person in her life.

Emin had a relationship with Carl Freedman in mid-90s. The beach hut which was used by her to create ‘The Last Thing I Said to You is Don't Leave Me Here’ was the place where Carl and Tracey spent time together by the sea after touring the US in a Cadillac. This was also destroyed by the Momart fire.

Tracey Emin is rumored to have had a 5-year relationship with another YBA Matt Collishaw.

In 2015, she shocked the whole world by announcing that she is married to a stone. She held a wedding ceremony by herself in her garden in France.