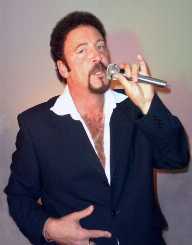 Tom Jones is a British singer known for his powerful voice.

Thomas John Woodward was born in the village of Treforest, Wales, on June 7, 1940. His father, Thomas, was a coal miner. His mother, Freda, was a housewife. He suffered from tuberculosis when he was 12 years old.

Tom Jones attended the Wood Road Infants and Junior School, as well as the Pontypridd Central Secondary School. He dropped out at the age of 16 and he started working to support his family. He had several jobs- working in a factory, in construction, and as a salesman.

In 1963, Tom Jones started singing with the Welsh band Tommy Scott and the Senators. They became somewhat popular in the local area, but they didn’t manage to sign with any record labels. The next year, the successful manager Gordon Mills spotted him during a gig and took him to London. He advised him to change his name from Thomas Woodward to Tom Jones, a name taken from the popular British comedy.

Jones’ first single, “Chills and Fever”, was released in 1964. It was not a success. His second single, “It’s Not Unusual”, became a huge hit. He soon started making songs for different films, including the James Bond film, Thunderball.

Tom Jones also explored genres such as country music. In the next few years, he had a number of hits in both the United Kingdom and the United States. They included “I’ll Never Fall in Love Again”, “Delilah”, “Detroit City”, and many others.

Jones started to perform in Las Vegas in 1967. He first started on the stage at the Flamingo hotel. He became known for his energetic performance and style.

Tom Jones regularly performed in Las Vegas at least once a year until 2011. In 1969, he started his own television show called This Is Tom Jones. It featured performances from singers like Frank Sinatra, Cher, Janis Joplin, Stevie Wonder, and many others. It also showed comedy sketches. It lasted for a total of two years.

After the end of the show, Tom Jones went on tour. He had a few hits, such as “She’s a Lady”, “Till”, “Say You’ll Stay Until Tomorrow”, and others.

He and his manager started a label called MAM Records. In 1979, he made his debut as an actor in the television film Pleasure Cove. In the early 1980sTom, Jones focused more on country music. He had a few hits in the country charts. In 1986, his manager died, so the position was taken over by his son. He then achieved great success with his single “A Boy From Nowhere” and with the cover of “Kiss” by Prince.

In the 1990s, Jones played himself in the popular television shows The Fresh Prince of Bel Air and in The Simpsons, as well as in the film Mars Attacks. His album Reload hit the first spot on the British charts.

Tom Jones performed in the New Year celebrations. He continued to release albums like Mr. Jones, 24 Hours, Praise and Blame, and many others.

Many of his singles ranked on the charts. Tom Jones collaborated with many artists, including Wyclef Jean and John Farnham. He performed at the Queen’s Diamond Jubilee Concert. From 2012 to 2015, he served as a judge on The Voice UK. He took part in a few shows aired by BBC.

Tom Jones has received numerous awards and nominations for his work. In 1966, he won a Grammy for Best New Artist. Four years later, he was nominated for a Golden Globe for Best Actor in a Television Musical or Comedy.

In 1989, he got his star on the Hollywood Walk of Fame. In 1999, Queen Elizabeth II made him an Officer of the Order of the British Empire for his contributions to the arts. Seven years later, she gave him a knighthood for his services to music.

Tom Jones married his high school girlfriend Linda in 1957. That same year, they had a son named Mark. They stayed together until her death in 2016. He publicly cheated on her with many women, both with fans and with celebrities. In 1988, he had a son with a model named Katherine Berkery.