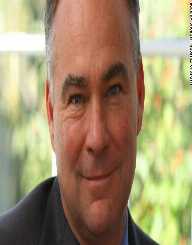 Tim Kaine is an American Politician and attorney and is currently the `Junior United States senator’ from Virginia. Tim Kaine won the senatorial seat in 2012 and became the nominee for the vice-presidential seat for the Democratic Party, during the 2016 elections. Tim gained interest in politics when working with Jesuit missionaries in Honduras, where he noticed bad effects of poverty. Since then, Tim committed himself to social justice and had a successful legal career.Tim's  political career began by serving on the Richmond City Council. Tim rose to higher ranks in the preceding years and became Virginia’s governor in 2005. He then served as Chairman of Democratic National committee before becoming a Senator.

Timothy Michael Kaine was born on 26th February 1958 at Saint Joseph Hospital located in Saint Paul, Minnesota. His parents were Mary Kathleen and Albert Alexander Kaine Jr. Albert worked as a wielder who owned and operated a small Iron-working shop while Mary was a home economics tutor. The family is believed to have had Irish and Scottish origins. Albert and Mary had two other sons apart from Tim Kaine. Tim Kaine was brought up in the Kansas City area, where he went to school at Rockhurst high school. The school was located in Kansas City and was a boy’s only preparatory institution. While there, Tim took part in the school’s debate team. More so, he served in the student’s body as their president.

Tim Kaine then graduated in 1976 and went to the University of Missouri, where he pursued studies in economics, and graduated in 1979. Tim was not content with a profession as an economist; hence he joined Harvard law school to become a lawyer. At the time, Kaine frequently worked with Jesuit missionaries in Honduras, which disrupted his studies often. While working with them, Tim Kaine noticed high levels of poverty and poor social welfare and felt the need to help the underprivileged. More so, Kaine became fluent in Spanish as a result of his time there. Tim then graduated from Harvard in 1983 with a J.D degree. Tim relocated to Richmond, Virginia after graduation.

Tim Kaine, after law school graduation, got employed as a clerk to Judge Laineri Anderson in Macon, Georgia. Tim was then hired by the Richmond law firm of Little, Parsley, and Clucerius, P.C. At this early stage, Kaine looked brilliant and ambitious in his work.Tim was soon appointed as director for Mezzullo and Mcandish law firm in 1987. Tim mostly dealt with housing law and also helped clients that were abused racially or due to disabilities. At the time, Tim Kaine spent a lot of his time working on the pro-bono work. As a result, he helped start the Virginia Coalition whose objective was to curb the problem of Homelessness. Apart from law, Kaine worked as an adjunct professor for legal ethics in University of Richmond School of law. Tim worked in this position for about six years.

Tim Kaine then decided to pursue his political aspirations, which had been greatly influenced by his family’s political stands. In 1994, Tim got voted into the City council of the city of Richmond. As he worked there, his prominence as a political figure grew steadily. In 1998, Tim Kaine was elected the mayor of Richmond, a position he held until 2001. When Tim was mayor, he influenced implementation of a law called Project Exile. The law contributed greatly to the reduction of gun-related violence in the municipality.

Tim Kaine also served as the lieutenant governor and ultimately as the president of the Virginia state. Tim then took a step further in his political career and sought after Virginia’s gubernatorial seat. In 2005, he won the elections and was voted in as the governor of Virginia against Jerry W. Kilgore.

Tim Kaine was installed as governor on 14th January 2006 and became the 70th governor of the state. As a governor, Tim enjoyed relatively great success and smooth work operation.Tim, however, faced little challenges in 2008 to 2009 whereby there was an economic crisis. However, the unemployment rate in Virginia was still lower compared to the national average. The state thrived under Tim Kaine's leadership and was hailed by many as a great leader. In 2009, he took up the position of chairperson of Democratic National Committee, after a request by the then president, Barrack Obama. Tim worked there and contributed significantly to the expansion of the party’s grassroots.

AfterTim Kaine's reign as governor ended in 2010, Kaine began working with University of Richmond again as a part-time lecturer. In 2012 Tim contested the senatorial seat in Virginia and won the elections. Kaine was sworn in as Junior United States senator, on 3rd January 2013. In 2016, Tim supported Hillary Clinton as the presidential candidate, and widely campaigned for her. Tim was then named her vice presidential running mate for the upcoming elections.

Tim Kaine supported the Project Exile program in association with the likes of James Comey while working as the mayor of Richmond. The program led to the reduction of homicides by about 55%. He formed a committee responsible for monitoring changes in climate when he was Governor of Virginia. As a result, protected about 1600Km square of land in Virginia from development.

Tim Kaine was awarded the William green Award in 2012 by University of Richmond-School of law. He was awarded the Humanitarian award from Virginia center in 2000. He was the recipient of the Appalachian Trail Conservancy Congressional award in 2015.

Kaine was awarded the National interests distinguished award in 2016.

While in Harvard, Tim Kaine met Bright Holton as a first-year student then. Holton is a daughter of Linwood Holton, who also served as Virginia’s governor. They got married in 1984 and had three children together.